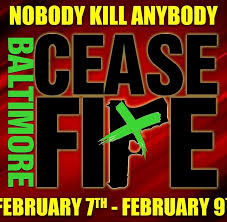 A surplus of blackness and a paucity of whiteness. Or, more appropriately, a city dominated by the black hegemony.

Welcome to Baltimore in 2020, a 70 percent black city completely dominated by black elected/appointed officials in all aspects of the bureaucracy. Confederate memorials are all removed, streets and buildings once named in honor of dead white males have been erased, racially re-named to honor the new demographic dominating Baltimore life.

If you’ve read The City that Bleeds: Race, History, and the Death of Baltimore (and if you haven’t, get it here now!), you know the truth about Baltimore our elite have spent more than half a century trying to explain away as the fault of pernicious white people and their insidious redlining, systemic racism, and racial criminal justice system.

With a homicide rate of 57 per 100,000, 70 percent black Baltimore is one of the most dangerous cities in the entire world.

What’s interesting is back in 1920, Baltimore was 85 percent white and had a population of 733,826 people. The overall percentage of the population has dropped 18 percent in 100 years, with whites now roughly 24 percent of the population.

The decline of whites in Baltimore would have you believe a war was lost, with the radical racial replacement in the city indicating a conquered people (of course, white people are still blamed for all the problems blacks create in the city, even though elected black officials/appointed black officials in public office control the city).

But here’s the kicker: back in 1921, when whites politically controlled the city of Baltimore and represented 85 percent of the population, there was a far different homicide rate: 11.3 per 100,000 people.

Why mention this? Well, because during the city’s first Ceasefire week of 2020 (after black men marched in early January to stop blacks from killing other blacks), individual black people couldn’t stop shooting other blacks.

Many are reeling from a particularly violent weekend which happened during the first Ceasefire Weekend of the new year.

From Friday to Sunday 15 people were shot, and a total of four people killed in homicides over this past weekend. This now brings the total number of people murdered in the city so far this year to 33.

Some Baltimore officials hope to beef up the force with Chicago-style technology.

The most recent homicide this weekend happened Sunday morning a man was shot in south Baltimore near Coppin Court. They asked lawmakers to help fund 9 community intelligence centers in Baltimore.

They believe the centers – which provide real-time support for detecting and responding to crimes – will help cut down on the violence.

Some running for mayor say, it is going to take more than just new technology to reduce crime in Baltimore.

Only in a city where blacks named a youth empowerment center after Freddie Gray, the convicted heroin dealer blacks rioted on behalf of in 2015, could a Ceasefire weekend (where well-meaning black people try and convince their fellow blacks to stop killing/shooting each other for just 72 hours) see 15 shot/4 dead.

This wasn’t happening 100 years ago, when Baltimore was 85 percent white…