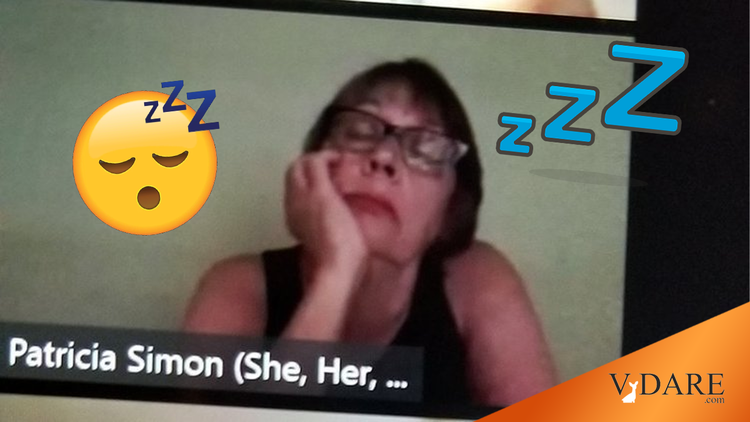 No Sleep For The Woke

… Students are seeking the termination of Marymount Manhattan Theater Arts Associate Professor Patricia Simon after she appeared to briefly fall asleep during an anti-racist meeting held on Zoom.  Simon denies the allegations but Marymount Manhattan student Caitlin Gagnon started a petition which features this picture and also accuses her of “ignoring … racist and sizeist actions and words of the vocal coaches under her jurisdiction.” The petition has roughly 2000 signatories. It is an ironic twist on the woke movement where literally not being awake is now cause to be terminated. Professor Simon insists that the picture was a false image due to her bifocals and how she changed her angle to rest her eyes:

“I was not asleep as is implied at any point during the meeting,” she said, adding, “the photo used was taken without permission when I was looking down or briefly resting my Zoom weary eyes with my head tilted back which I must do in order to see my computer screen through my trifocal progressive lenses. I listened with my ears and heart the entire meeting.”