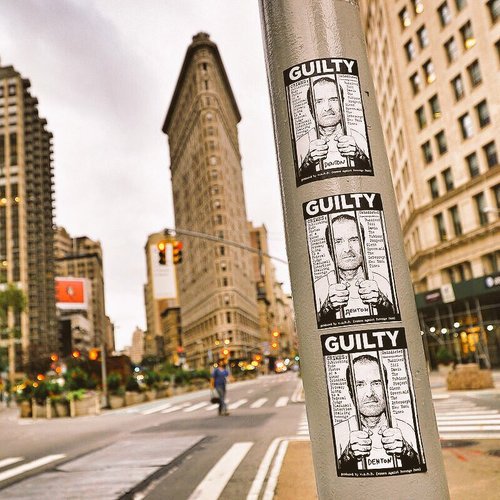 In an article on Terry “Hulk Hogan” Bollea’s nine-figure lawsuit victory against Gawker, John Reid wrote, “The plain fact is that it is Main Stream Media journalists, and their corporate allies, who are the biggest threat to free expression by ordinary citizens in America today.” It now appears like some citizens are fighting back against the media. The Flatiron district where Gawker is headquartered is now covered with posters of Gawker Founder Nick Denton behind bars with the charge sheet of It also names Main Stream Media outlets like Buzzfeed and the New York Times as co-conspirators. [Breaking: Nick Denton ‘Guilty’ Posters Pop Up on New York City Streets, Gateway Pundit, August 10, 2016]

Beyond the details of the poster, websites like Gawker have existed to smear and ruin reputations of their ideological foes, often lying and invading privacy in the process. The Left constantly uses guerilla tactics like wild posting in liberal cities, but their ideology is pretty much in line with the political and media establishment like Gawker. While it’s not clear what ideological motivations whoever posted the Jail Denton posters had, it was a truly subversive act to give the Smear Bund media a taste of its own medicine.