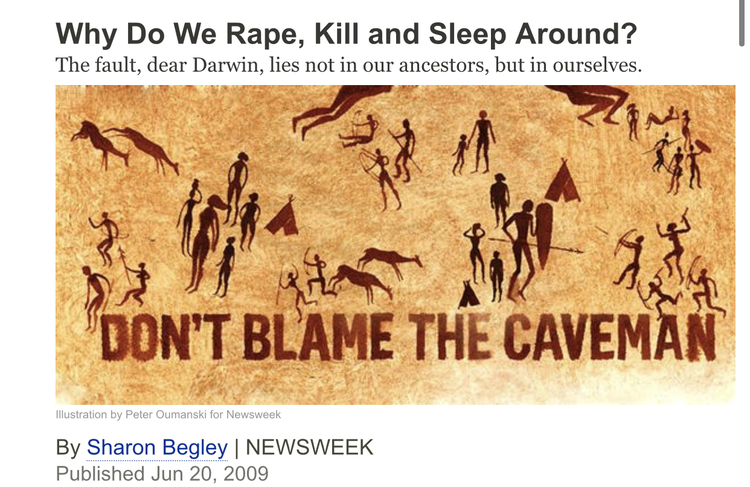 Newsweek's Sharon Begley isn't getting any younger. And she's not getting any happier either about that tenet of evolutionary psychology that asserts, in her scoffing words in the current issue of Newsweek:

Men attracted to young, curvaceous babes were fitter because such women were the most fertile; mating with dumpy, barren hags is not a good way to grow a big family tree.

So, she spends 4300 words renewing her long-running attack on Evolutionary Psychology in:

Why Do We Rape, Kill and Sleep Around? The fault, dear Darwin, lies not in our ancestors, but in ourselves.

... Evo psych took its first big hit in 2005, when NIU's Buller exposed flaw after fatal flaw in key studies underlying its claims, as he laid out in his book Adapting Minds.

I don't think it's too unfair to claim that Begley enunciated her most personal objection to evolutionary psychology in her 2005 review of David J. Buller's book in the Wall Street Journal:

Besides, if you scrutinize the data, you find that 50-ish men prefer 40-something women, not 25-year-olds, undermining a core claim of evo psych.

I give economists a hard time sometimes, but they all know this very useful concept — "all else being equal" — that Begley seems unfamiliar with, even though it's obviously essential to putting evolutionary psychology's assertions in proper perspective.

The really funny thing is that Begley has never figured out that David J. Buller’s attack on mainstream Evolutionary Psychology comes from an even more politically incorrect direction than does EP. Buller focused on two weak links in EP:

1. The brain evolved a wide variety of domain-specific modules.

2. The human race evolved a single human nature back during the Stone Age, with only sex differences being the only differences among humans of interest or importance.

And those premises are indeed weak, but their weakness has major implications that Begley would not want to mention in public.

1. Evolutionary psychology has tended to ignore the key insight of the last 105 years of psychometrics: the existence of a g factor, a general intelligence factor. This is not to say that there aren’t domain specific mental modules, just that the g factor glass is not just half empty, it’s also half full, and thus needs to be included in evolutionary psychology, or, indeed, any form of psychology.

2. Similarly, standard EP has tended to gloss over the fact that The Era of Evolutionary Adaptation has extended up to the present. Indeed, as Gregory Cochran and Henry Harpending argued recently in The 10,000 Year Explosion, the coming of agriculture likely accelerated the rate of genetic change. But continued Darwinian selection after the dispersal of the human race out of Africa to quite different environments on different continents raises ticklish issues about human biodiversity that can be career killers in modern America. (Just ask James D. Watson!)

Considering how much eminent thinkers such as Watson, Arthur Jensen, and Charles Murray have been abused for their frankness in recent decades, it was perfectly reasonable for the founders of evolutionary psychology to shy away from these issues. After all, their taking on Feminist Orthodoxy at the peak of its power two decades ago was enormously brave.

Nonetheless, the future evolution of evolutionary psychology will depend upon finding solutions for these two shortcomings in its fundamental approach. (While somehow avoiding getting Watsoned.)