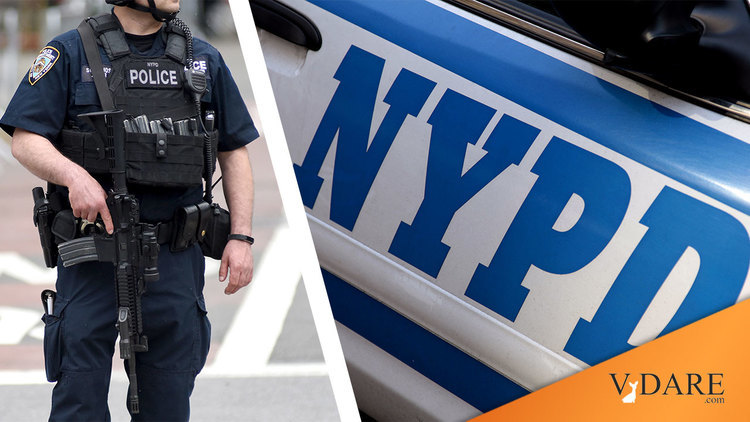 News That Used To Be Fit To Print: IQs Of 1969 NYPD Recruits

From the New York Times news section over a half century ago:

The average I.Q. scores of recruits entering the Police Department here in 1969 were the lowest recorded in recent years, according to a study financed by the Justice Department. Although police experts are divided over the question whether the decline in I.Q. scores will mean a decline in police services, the authors of the study were concerned enough about the drop to use it as major element in their argument for changing departmental training methods.

Some police departments, such as the one in Los Angeles, say they will not take men with I.Q.’s under 110, according to Dr. Nelson Watson, director of the professional standards division of the International Association of Chiefs of Police.

“I personally think this is bit high,” Dr. Watson said. “But when you start getting men scoring less than 90—and with an average of 93 you begin to wonder. Below 90, the experts say you can notice a real drop in levels of competency.”

The general public is supposed to have an I.Q. score of 100. But questions have been raised whether the scores measure intelligence or the ability to take a test. “The drop may reflect a drop in the quality of the schools rather than the men,” one police official said here.

The reason for the decline, according to several officials, appears to be related to the goal of quickly increasing the size of the Police Department and the subsequent easing of standards in the scoring of the entrance test given by the New York City Personnel Department. …

The study insisted that the decline in I.Q. scores was not related to the department’s efforts to recruit members of minority groups.

“The results of the July, 1968, class were analyzed by ethnic groups and no significant differences were found between the average of the class as a whole and those of black and Puerto Rican minority groups,” the study said.

Blacks were 12% of the July 1968 class and 7% were Puerto Ricans. The Puerto Ricans did well on a second IQ test given to new recruits, although the report is coy about black scores. Nonwhite recruits were growing rapidly, but were still under 20% of the total.

In general, the report worries that the social class background of new recruits has fallen over the course of the 1960s. In 1968, the economy was booming, streets were getting dangerous, and cops were falling out of fashion, so becoming an NYPD cop might not have been as appealing to smarter young men as in 1962.

The impact of the relatively low scores in 1969 — the averages recorded in the last two recruit classes have re turned to earlier levels—is not clear.

“A man with 93.19 might be perfectly competent,” Mr. Wetteroth said, “but if all patrol men were at the level it might mean a less‐able department.”

As a result of the study, which was conducted by group under the direction of Chief Inspector George P. Mc Manus, the Police Department is moving to make a number of changes in its training procedures.

The department’s chief of personnel, Assistant Chief Inspector Elmer C. Cone, said these changes included a deemphasis on the straight lecture in the Police Academy, increased use of training aides such as films and a new technique in which recruits will get their first taste of walking a beat under the guidance of 1,800 carefully selected and trained “escort officers.” …

It would certainly be interesting if articles like this were printed these days. But the public isn’t encouraged to be informed about such things, mostly due to the Race Uber Alles mindset.