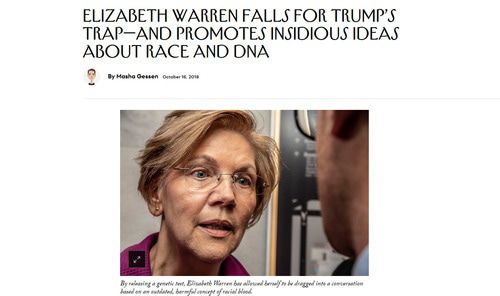 The Trumpian taunt is a trap. A video released by Senator Elizabeth Warren, of Massachusetts, on Monday demonstrates just how it works. …

When ancestry-testing services first appeared in this country a dozen years ago, they found that Americans, at least, tended to have fairly reliable stories about their family heritage. An exception was people who had a family story, usually passed down through a number of generations, of having Native American blood—most often, the legend said that they were Cherokee. For years, geneticists had trouble finding any corroboration for this claim. It’s possible that their tests weren’t sensitive enough, or that they were looking in the wrong place; it is also possible that family stories of having descended from Native Americans were particularly unreliable. Over time, the tests learned to detect ever more subtle signs and patterns, as Warren’s case appears to have done.

First generation testing services had an amusing knack for reporting Ashkenazi Jews as part American Indian: famously, Larry David was declared to be 3/8ths Native American in 2009, which sounds like a Curb Your Enthusiasm episode, but actually happened. But they’ve gotten a lot more competent over the years.

… The senator’s video is carefully worded. Warren says that she is laying no claim to citizenship in a tribe. She frames her understanding of her ancestry in terms of experience, though this experience seems fairly well removed: the defining event in Warren’s family was her father’s family’s disapproval of his marriage to her future mother; Warren says that it was the Native American heritage that made her father’s family suspicious. Talking heads from the universities where Warren was employed assure the audience that she has never used her heritage to advance professionally.

I’d find these kind of declarations more persuasive if they included a list of Harvard Law Professors who indeed were hired for Diversity reasons. For example, I’d be impressed if a former dean said on camera: “Senator Warren was completely not a quota hire, unlike, say, Derrick Bell, who is only here because he’s black. If Derrick Bell were white, we wouldn’t have hired him in a million years even if he were the last white man on earth. But Warren was totally different that Bell.”

That’s the kind of hard-hitting inside investigation I’d pay to read.

But, in general, almost nobody in the 49 year history of affirmative action has ever been personally singled out by the Establishment as benefiting from affirmative action according to insiders who made the hire. You are allowed to be vaguely aware that affirmative action exists, but you aren’t ever supposed to think about who exactly got in because of it.

… Warren ended up providing one of the clearest examples yet of how Trumpian rhetoric shifts the political conversation.

Why is the President allowed to intrude in The Conversation? We need to have a national conversation over who is allowed into the conversation. And, more importantly, who isn’t. Why can’t Trump understand that the phrase “the conversation” means STFU, YT?

… She is also reinforcing one of the most insidious ways in which Americans talk about race: as though it were a measurable biological category, one that, in some cases, can be determined by a single drop of blood. Genetic-test evidence is circular: if everyone who claims to be X has a particular genetic marker, then everyone with the marker is likely to be X. This would be flawed reasoning in any area, but what makes it bad science is that it reinforces the belief in the existence of X—in this case, race as a biological category.

Warren’s video will hardly convince a Trump voter, who will see only a woman who feels that she has to prove something. Trump himself has already walked back his promise of a million-dollar charity donation. Warren, meanwhile, has allowed herself to be dragged into a conversation based on an outdated, harmful concept of racial blood—one that promotes the pernicious idea of biological differences among people—and she has pulled her supporters right along with her.