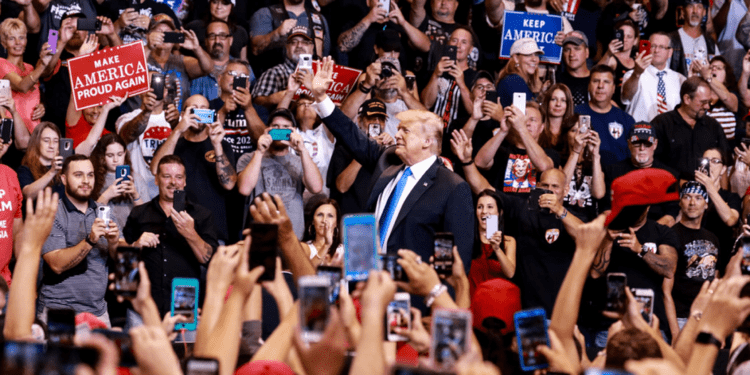 NEW YORK TIMES: "White Anxiety, and a President Ready to Address It"

White Anxiety, and a President Ready to Address It

Evidence of concern about demographic and cultural shifts is not new. What’s different is the willingness to politicize it openly.

… Surveys show fears among some white people that they are losing status in America, and those holding such views are increasingly aligned with the Republican Party. These voters perceive anti-white discrimination. A growing share say the nation risks losing its identity because of openness to foreigners. And many are concerned about what it will mean when non-Hispanic whites lose majority status, as demographic projections suggest will happen around 2045.

A large if not majority share of white voters, and a majority of Republicans, say this change will threaten American customs and values — a prospect that they say makes them anxious, even angry.

But without a politician of the president’s stature so vocally exploiting it, political scientists say, this lurking sense of white status loss would probably not be such a combustible theme in American politics.

“It really takes a Trump to ignite it,” said Michael Tesler, a political scientist at the University of California, Irvine….

Research is beginning to suggest that white voters who have long been politically motivated by their views of other groups may be starting to think of their own group as an explicit identity. In that sense, they appear for the first time in the Trump era to be thinking about themselves in ways that mirror how minorities have long thought about group identity.

But, of course, whites are Bad and nonwhites are Good, so this increased equality is Bad.

This isn’t complicated logic, people! Just remember at all times who was born with Bad Blood and you’ll be ready to write for the New York Times.

It wasn’t a foregone conclusion that American politics would end up here in 2019, with voters chanting to send a foreign-born American congresswoman back to Africa. A different politician at the top of the Republican Party — one focused, say, on tax cuts rather than immigrants — might have left these white racial anxieties more dormant, or less clearly linked with partisanship.

“All of a sudden, these people who had no vehicle to express these attitudes are now being invited to express them,” said Lynn Vavreck, a political scientist at U.C.L.A. and occasional Upshot contributor, and a co-author of a book with Mr. Tesler and John Sides on the role of racial identity in the 2016 election. “Trump is a huge element in what’s going on. He’s insufficient, but he’s necessary. The voters are not sufficient but they’re necessary.”

There’s nothing worse for Democracy than having an elected President and a large segment of the voters who agree with him.

The evidence that racial attitudes now play an important role in vote choice among white voters is overwhelming. It has been replicated in study after study, in just about every major survey in political science over the last decade. …

In other words, racist racism.

like believing that African-Americans struggle to get ahead because they don’t work hard enough, rather than because of discrimination or the legacy of slavery.

Of course, it’s just Settled Science that FDR’s redlining is the cause of black problems in 2019.

But these attitudes were often latent in electoral politics. More than a decade ago, a majority of less educated white voters did not perceive a major difference between the two parties on racial issues, according to Mr. Tesler’s research. And most campaigns weren’t overtly trying to disabuse them of that notion.

Now, some white voters, especially less educated ones, see a bigger difference between the two parties on racial issues.

Seriously, what actually happened was the Democrats moved way left during the Great Awokening of c. 2013.

“To me, the mystery is the speed with which what seemed to be a set of well-established norms crumbled,” Mr. Hopkins said. “How do you go from a Republican Party after 2012, which was very actively talking about courting Latino voters, to a Republican Party in 2016, which was doubling down on appeals to white voters?”

In this environment, polls show that a substantial number of white voters believe they face discrimination. They appear to be concerned that employers and schools may give preference to nonwhite candidates.

They don’t understand why cultural norms encourage nonwhite racial groups, but not white people, to openly identify with and celebrate their race. They might even resent that there’s no “white history” month, something that 29 percent of whites say they support.

We have a New Liturgical Calendar with saints days and holy months like Martin Luther King’s birthday, Black History Month, and Pride Month (which this year started to feel like Pride Eternity).