There’s an interesting front-page item from the liberal flagship: two diverse men in a physical altercation at the notorious San Jose Trump rally where a young woman wearing a Trump jersey was egged by a mob of men. (Pictured above.) 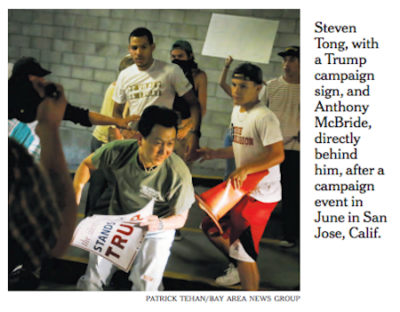 Oddly enough, the Times news article had no mention of Democrat operatives hiring provocateurs to create violent incidents at Trump rallies to sully the candidate. James O’Keefe of Project Veritas went undercover and filmed the Democrats admitting to things like targeting the elderly and disabled with violence to maximize shock value. Scott Foval, national field director of Americans United for Change, was recorded saying, “We’ve been busing people in to deal with you f–ing assholes for 50 years.”

The San Jose event was violent and police protection was minimal.

But the Times article was not curious whether the man accused of vandalism, battery and the attempted theft of a Trump supporter’s sign was a paid agitator or was inspired to physical confrontation by provocateurs around him.

Instead, the Times is sad about how unkind we Americans have become in our politics.

SAN JOSE, Calif. — It was a fleeting confrontation between two strangers that might have otherwise been forgotten.

But the tussle over a Donald Trump campaign sign after a June rally in San Jose, California, has sent one man, Anthony McBride, to jail for six days, and left another, Steven Tong, lamenting the loss of civility in our democracy.

The rally where these two lives collided by happenstance erupted into one of the most violent episodes of this contentious presidential election. Video footage of protesters punching, egging and tackling Trump supporters went viral, sparking outrage among Republicans and soul-searching among Democrats.

Today, the clashes between ordinary people like McBride and Tong are playing out in the California courts, in a series of criminal prosecutions brought about as Republican officials accused a city led by Democrats of failing to protect Trump supporters at the rally.

The San Jose rally and its aftermath may be the most powerful illustrations of the dangerous polarization that has gripped the country during the 2016 election.

But a closer look at Tong, one of rally’s 24 victims, and McBride, one of 22 people charged with crimes after the event, suggests there is much the two men share. The economic struggles and personal dreams that guided them that day are not so different.

On June 2, Tong woke up in his parents’ house, where he has lived for three years, unable to afford a place of his own.

He is 46. He had dreamed of becoming a product designer and starting his own company. But art school was too expensive, and he left after a year.

Tong’s faith in the American dream has been shaken. But he had a ticket to see Trump speak.

That same morning, Anthony McBride, who is anti-Trump, woke up in the apartment of his friend’s mother, where he has lived for three years, unable to afford a place of his own.

He is 21. He dreams of being a fashion designer and starting his own company. But art school is too expensive. He works two jobs to save for it.

McBride’s faith in the American dream remains intact, but it is marred by the bigotry he sees as a product of Trump’s campaign.

Like many Asians in San Jose, Tong was born in Vietnam. He was 4 when communists captured Saigon. Officials forced Tong’s family to move to a remote hut.

When he was 9, his family made it to California. They embraced the Republican Party’s strong anti-communism stance.

Tong considers himself a moderate. He once cast a ballot for Bill Clinton. He says he does not agree with Trump’s remarks about immigrants and Mexicans.

Tong once felt boundless optimism about the United States. His parents, who worked entry-level jobs in electronics, had been able to buy a three-bedroom home. But now Tong cannot afford to rent a home of his own. He was drawn to the June rally by Trump’s promise to make America as strong as it was when Tong arrived.

Tong left the rally clutching a sign: “The silent majority stands with Trump.”

He walked back to his car, chatting with a teenager from Mexico who held a sign opposing Trump. They joked about trading signs. Nothing seemed threatening. But when Tong reached the parking garage, he witnessed protesters trying to steal Trump hats off the heads of an older Hispanic couple.

Tong ran into the garage. He noticed a tall black man coming behind him.

“It was a Tuesday, my day off,” McBride recalled. While checking Twitter, he noticed that Trump was coming to town.

McBride hoped to get into the rally “to go experience what he says for myself,” he said. But police officers blocked the entrance. So he drifted to the “free speech” area, where protesters gathered.

McBride considers himself a moderate. He opposes amnesty for undocumented immigrants. He believes the entrepreneurial spirit should be rewarded. But it is racism — not government regulation of the economy — that worries him. The son of an African-American father and an Irish mother, McBride blames the recent racial unrest on injustice.

To McBride’s generation, the spate of police killings of black people shows the limits of politics and the need for activism. Protests — not the election of a black president — have brought a modicum of justice.

Joining the gathering crowd outside the convention center, McBride felt he had justice on his side. But then the rally inside ended. Trump supporters poured out. Protesters chanted obscenities at them. They hurled insults back.

McBride admits he got angry that day. He says Trump supporters mistook him for Mexican and shouted insults.

He followed a wave of protesters into a parking garage. That’s where he spotted an Asian man with a Trump sign.

“I was kind of disappointed in him,” McBride recalled. “He’s a minority, and I didn’t see why he’s supporting Trump.”

McBride snatched Tong’s sign. Tong grabbed it back. They held it together, in a tug of war. McBride could see the fear in Tong’s eyes. McBride thinks back on that moment and regrets being the source of Tong’s fear.

But two weeks after the rally, police asked McBride to answer questions. McBride, who has no criminal record, cooperated. He did not ask for a lawyer. “I wasn’t scared because I didn’t do anything,” he said.

Afterward, he expected to be allowed to go home. Instead, they took him to jail, where he remained for six days, accused of vandalism, battery and the attempted theft of Tong’s sign.

Now McBride, who cannot afford a lawyer, is not sure if he should plead guilty to a crime he doesn’t feel he committed, or fight the charges. He thinks when he grabbed Tong’s sign, and about what made him let go.

“I realized it was stupid,” he recalled. “If it was on a different street, at a different time, I probably would have just talked to him about why he was supporting Trump. But it was not a regular day.”