The New York Times notes problems on Mexico's southern border. The photograph below isn't of Mexicans invading across the Rio Grande, but Guatamelans invading Mexico: 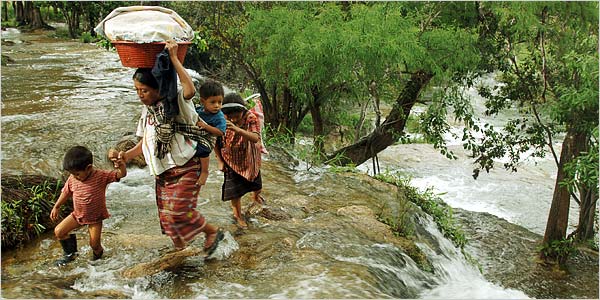 TAPACHULA, Mexico, June 11 — Quiet as it is kept in political circles, Mexico, so much the focus of the United States' immigration debate, has its own set of immigration problems. And as elected officials from President Vicente Fox on down denounce Washington's plans to deploy troops and build more walls along the United States border, Mexico has begun a re-examination of its own policies and prejudices. Here at Mexico's own southern edge, Guatemalans cross legally and illegally to do jobs that Mexicans departing for the north no longer want. And hundreds of thousands of illegal immigrants from nearly two dozen other countries, including China, Ecuador, Cuba and Somalia, pass through on their way to the United States.[Mexico Worries About Its Own Southern Border By GINGER THOMPSON, New York Times, June 18, 2006]

Of course, this is old news to Vdare.com readers; in December, 2001, we mentioned Fox's Plan Frontera Sur, and asked if "President Fox would provide his friend Jorge Bush with a copy, since a Plan Frontera Sur is what our Presidente chiefly lacks." The NYT story includes a reference to a Honduran who's risking his life to get back to Miami, because he's "separated" from his wife and child after being deported repeatedly. Don't know why he's "separated" from them; the family could be reunified with no problem if his wife and child would get on an airplane to Honduras. A one-way ticket for the two of them should be about two hundred dollars.