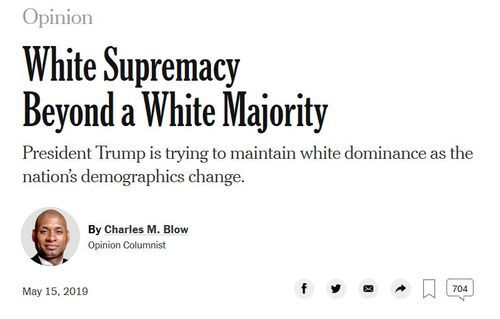 From the New York Times, an amusing confirmation of my latest Taki’s Magazine column on “Flight From White.”

White Supremacy Beyond a White Majority

President Trump is trying to maintain white dominance as the nation’s demographics change.

The white male racist patriarchy will not be denied. It is having a moment. It has its own president.

According to a Pew Research Center analysis of race/ethnicity and sex among validated voters in the 2016 presidential election, white men were the only group in which a majority voted for Donald Trump — 62 percent — although a plurality of white women did also — 47 percent.

We are living through a flagrant display of a white male exertion of power, authority and privilege,

Literally, Chuck is saying white men voting is “a flagrant display of a white male exertion of power, authority and privilege.”

a demonstration meant to underscore that they will forcefully fight any momentum toward demographic displacement, no matter how inevitable the math.

The fear of white male displacement is a powerful psychological motivator and keeps Trump’s base animated and active.

Why do those horrible white males suffer the delusion that anybody intends to do them harm as their political power wanes? Where could they possibly come up with such a paranoid fantasy? I mean, besides from reading Charles Blow columns in the New York Times, who comes across like Stalin denouncing capitalist wreckers sabotaging the Dictatorship of the Proletariat in 1937. Whites will maintain their Emmanuel Goldstein-role forever.