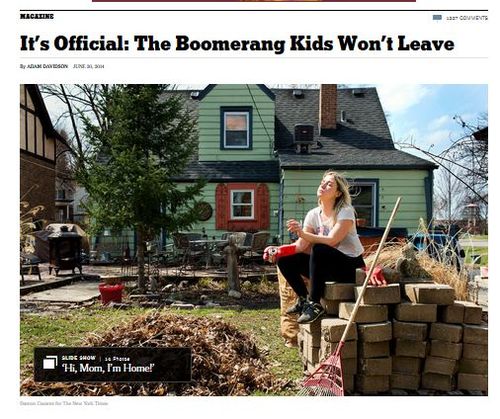 One in five people in their 20s and early 30s is currently living with his or her parents. And 60 percent of all young adults receive financial support from them. That’s a significant increase from a generation ago, when only one in 10 young adults moved back home and few received financial support. The common explanation for the shift is that people born in the late 1980s and early 1990s came of age amid several unfortunate and overlapping economic trends.

…Some may hope that the boomerang generation represents an unfortunate but temporary blip — that the class of 2015 will be able to land great jobs out of college, and that they’ll reach financial independence soon after reaching the drinking age. But the latest recession was only part of the boomerang generation’s problem. In reality, it simply amplified a trend that had been growing stealthily for more than 30 years. Since 1980, the U.S. economy has been destabilized by a series of systemic changes — the growth of foreign trade, rapid advances in technology, changes to the tax code, among others

Care to mention any others?

— that have affected all workers but particularly those just embarking on their careers. In 1968, for instance, a vast majority of 20-somethings were living independent lives; more than half were married. But over the past 30 years, the onset of sustainable economic independence has been steadily receding. By 2007, before the recession even began, fewer than one in four young adults were married, and 34 percent relied on their parents for rent.

The New York Times runs several Deep Think pieces per week on How Did We Get in This Mess? A fun thing to do is to hit CTRL-F and type in “immigra” to see if the NYT has dared mention the I-Word. You can try it with this one and get the same results as probably over 90% of the NYT articles that give a laundry list of explanations, but almost never mention the obvious impact of immigration in driving up housing costs relative to wages.

Does this massive blind spot have anything to do with Carlos Slim, who profits exorbitantly off calls between illegal immigrants in America and their families in Mexico, being the financial savior and second biggest owner of the New York Times?