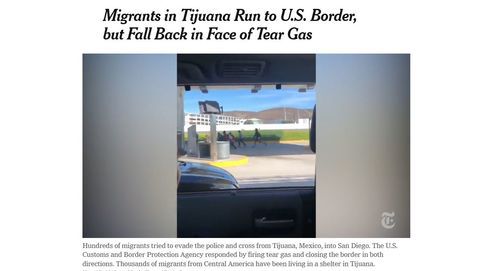 The New York Times normally doesn’t do sob story photos on its front page, given its reputation of being the staid and proper Grey Lady, but Monday was an exception. One can assume the point was to portray border chaos with President Trump as the meanie-in-chief who opposes open borders to the world (now 7.7 billion).

The photo shows a woman with two kids dodging tear gas in Tijuana as illegal alien Hondurans tried to storm the border. Presumably, the viewer is supposed to think that the cruel Trump is persecuting innocent kiddies. I see an irresponsible mother who has dragged her children more than 2000 miles to steal benefits and education from the American taxpayer. The United States is a national community of citizens, not welfare office to the world. 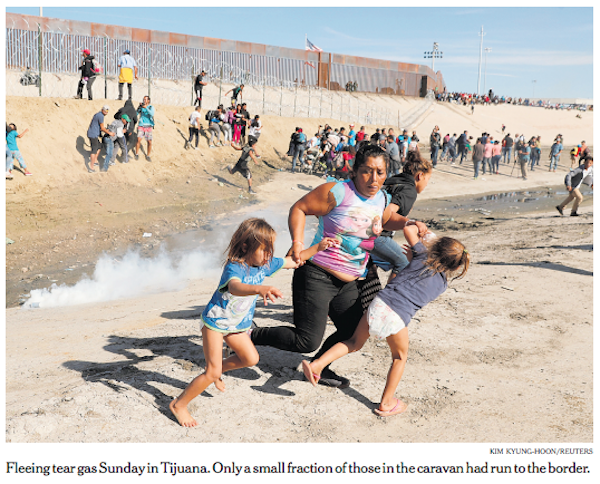 The accompanying Times story was reprinted in Telegraph India — good! Overpopulated India (now 1.4 billion) sends quite a few moocher pests to America. As reported here in August, Thousands of Illegal Alien Indians Show Up at the Border to Claim Asylum and Disappear, so they need to hear the news.

A peaceful march by Central American migrants waiting at the southwestern US border veered out of control on Sunday afternoon, as hundreds of people tried to evade a Mexican police blockade and run toward a giant border crossing that leads into San Diego.

In response, the US Customs and Border Protection agency shut down the border crossing in both directions and fired tear gas to push back migrants from the border fence. The border was reopened later on Sunday evening.

The episode comes at a time of growing tension on both sides of the border and promised to become the newest flash point in the story of a caravan that was the target of President Donald Trump’s anti-immigrant rallying cry during the midterm elections.

Trump has made preventing their entry into the United States a signature stance of his administration over the past few weeks and has sent US soldiers to the border, although the US military was not involved in Sunday’s clash. The images of unrest on Sunday will likely provide him with additional ammunition as he tries to keep out the caravan members and other immigrants and refugees fleeing poverty and violence in their homelands. (Continues)