The Times is concerned that the recent infernos in northern California have left many of the foreign workers homeless, or certainly with fewer housing choices. The paper fears that they might pick up and depart, leaving wineries with no workers for the vineyards.

Interestingly, many of the grape pickers are illegal immigrants, even though the H-2A visa allows farmers to have as many foreign ag workers as they want.

But technology provides the answer to any fire-caused labor shortage with a variety of agricultural robots. The video below reports that regarding the chore of pruning back shoots, “In a nine-hour workday, a crew of about 20 workers can get to 200 plants, but with these machines a crew of just three workers can get to over 14,000.”

The machine still needs a driver, but a self-driving tractor-robot for grape-picking can’t be far off.

A French inventor has created a more futuristic-looking machine, called a Wall-Ye, for tending the grapes, shown below. It is a tiny, less tractor-like machine that putters around from the ground level to do its thing. 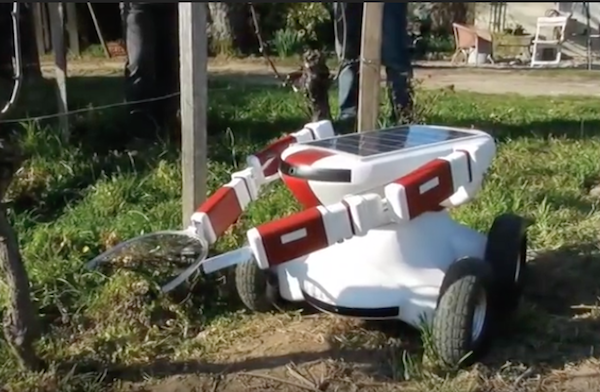 So the New York Times needn’t worry about agricultural tasks getting done — that sector of the automation revolution is moving ahead quite rapidly.

As Fires Move On, Wine Country Wonders Whether Immigrants Will, Too, New York Times, October 17, 2017

Many of the foreign-born workers the region depends on are undocumented and do not qualify for most disaster aid. They may struggle to find affordable housing.

SEBASTOPOL, Calif. — The lush vineyards that dot the hillsides and valleys here largely survived the fires that leveled neighborhood after neighborhood to the east.

Crushed cabernet sauvignon, merlot and other grapes in tanks are now fermenting into wines that have earned California a prestigious place among global producers.

But the wine industry and the lodging, restaurant and construction sectors that help make this bucolic region a draw for millions of visitors each year are now bracing for a different crisis: the potential loss of many members of their immigrant work force.

Some 5,700 houses and structures have been destroyed and many more damaged by the blazes that barreled through Northern California last week. About 100,000 people were displaced, temporarily or permanently.

It is still too early to know how many of them were immigrants, who are in the most precarious position of any group. Because many of them are in the country illegally, they are ineligible for most disaster aid, raising concerns that those without places to live will move to other regions where housing is more plentiful and cheaper.

“To function, we have to be able to retain the immigrant workers in the area,” said Cameron Mauritson, who grows grapes on 350 acres in Sonoma County for 60 wineries. Losing them, he said, would be “catastrophic to our economy.”

In absolute numbers, the population of immigrants in Los Angeles, Oakland and other California metropolitan areas dwarfs that of Sonoma County. But immigrants play a significant role here: nearly one-fifth of the residents in Santa Rosa’s metropolitan area are foreign-born, according to an analysis by Manuel Pastor, a professor at the University of Southern California who studies immigration. Latin American immigrants, mainly from Mexico, dominate the blue-collar work force.