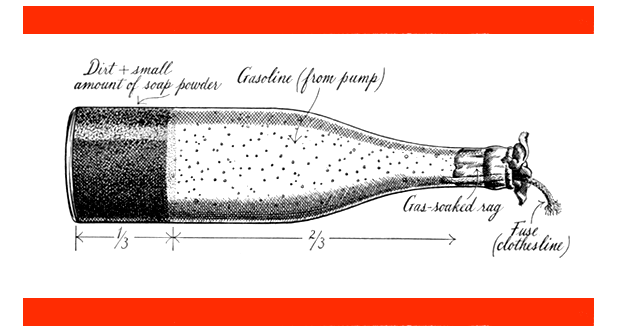 NEW YORK REVIEW OF BOOKS: Never Trust Anyone Under 79

When I was young, books like the 1970 bestseller Future Shock warned/promised that the rapid social change of the 1960s was just a foretaste of the acceleration to come. But then ... Well, it kind of seems like the winners of the Sixties are often still in charge, either in spirit or literally.

Consider the New York Review of Books, which was started by Robert B. Silvers and Barbara Epstein in 1963 during a New York newspaper strike that shut down all the daily book reviews. It quickly came to see itself as the house journal of radical chic, such as this 1967 cover diagramming how to make a Molotov cocktail.

Phrases like "Burn bright, burn fast" might come to mind, but the exact opposite has happened. The New York Review of Books is still a pretty good, serious (if dull) magazine. Judging from how stuffed with ads it is, it appears to be, remarkably enough, profitable. It claims to have a circulation of 135,000, which is huge for these days.

Not only is the New York Review of Books still there, but so is Robert B. Silvers, who continues to edit every line at age 84. The average age of the contributors must be astronomical by now (e.g., here's Malcolm Gladwell's latest book reviewed by 90-year-old Freeman Dyson, and here's Garry Wills, age 79, reviewing Joe Scarborough's political book in the current edition. Wills was a wunderkind, writing for National Review in the 1950s before moving left, so he just seems a lot older than 79).

In a lot of ways, that sums up much of the history of the last half century: the upstarts of the Sixties are still in charge. Back then, they liked Controversy, so everybody liked it. Now they don't like Controversy, so nobody likes it.