Every year before Thanksgiving, the media tells us about the increased security being put in place for big public events, like the parade in New York City, but with no mention of why that protection is necessary. None of the reporters ever remark that more police are needed because the borders remain open to unfriendly Muslims.

New York is threatened by jihad attacks because it is home to hundreds of thousands of Muslims, perhaps a million. Before there was Islamic immigration, New York City had no terror problem. Diverse immigration has made New York a far more dangerous place.

In fact, the city does remain a top terror target, as shown by the October 31 jihad attack that killed eight, perpetrated by the Uzbek Sayfullo Saipov who entered the US on a Diversity Visa.

Fox News reporter Rick Leventhal enumerated the increased security measures for the Thanksgiving parade, including “sniper teams and canines, aviation units and heavily armed counter-terror and strategic response officers, and the city also deploying more blocker vehicles and sand-filled sanitation trucks than ever before to block every intersection with access to the two-and-a-half-mile parade route to prevent any vehicle attacks on the crowd.”

All that police protection sounds expensive and indeed, last year’s security was estimated to run between $10.4 and $12.3 million, and this year’s safety measures are said to be even more extensive.

Diversity — particularly the Muslim variety — does not come cheap!

Below, the 1955 Thanksgiving parade (before Islamic immigration) featured unarmed police, with no snipers or counter-terror forces required. That’s Hopalong Cassidy on the horse. 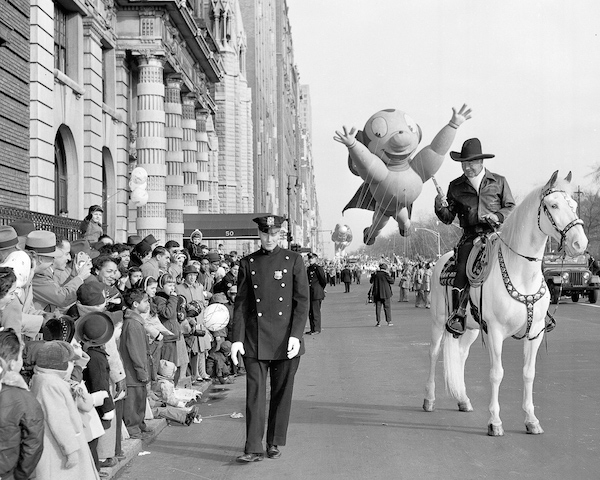 This year’s security includes snipers on rooftops as well as radiation detectors and officers with assault weapons.