Funny how when the New York Times decides to report on the topic of immigrants plus crime, the victims are foreigners who dont speak English.

You wouldnt expect to see reportage of Americans murdered, raped or stolen from, with the perps being illegal aliens from the queen of liberal media. Theres plenty of crime committed by border-violating foreigners, with many American victims, but the Times has a different agenda.

Besides, who would relocate to a complex, first-world nation without speaking the language at least a little?

Illegal aliens do, because they figure they can mooch American jobs and benefits by residing in a language-balkanized community like LA or Miami, where English is not required in everyday use. Plus the foreigners have the media on their side, plus well-paid ethnic helpers in La Raza and such.

The basic narrative here is immigrant-victim sob stories of foreigners not immediately presented with a police officer speaking their language. But at least there are some interesting facts, e.g. nearly two million English avoiders, plus a fascinating map of language diversity in New York City. 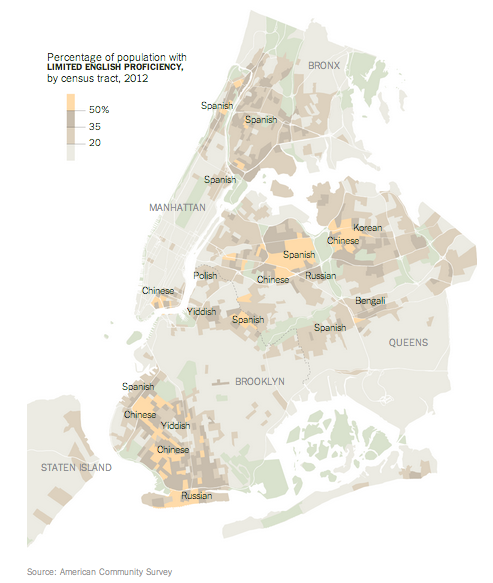 One also notices how many of the language complainers are women who have been beaten up by their culturally misogynous husbands. And no dollar cost is given for all this attention to diversity.

New York City now has more non-English speakers than ever, according to the Census Bureau: nearly two million. In response to this growing population, the city has assembled a host of programs to help it serve not just those who speak Spanish, Chinese and Russian, but also languages like Pashto, Punjabi, Uzbek and Urdu.

The New York Police Department, the largest in the country with almost 35,000 officers, has tried to stay at the forefront of the effort, and has billed its foreign language program as the world’s standard.

But having services doesn’t ensure they will be used, and some New Yorkers say that in the frantic, often frightening minutes just after a crime has occurred, their pleas for assistance in their native language have been ignored by officers. While help arrived swiftly after a call to 911, they say, officers didn’t summon a bilingual colleague, find an impartial bilingual bystander, or call the interpretation service the city uses for such situations. Domestic violence calls, already fraught with confusion and tension, have been particularly prone to language lapses, according to victim advocates. In interviews, several women said that without an interpreter, their attempts to report crimes were stifled.

A Russian-speaking woman said that after her husband accosted her in a drunken rage at his Coney Island home, she called the police. Officers ignored her requests to tell her story in her native tongue, she said. Instead, an officer scribbled the word “refused” and told her to copy it onto a report meant to contain her testimony. She followed his instructions. Embarrassed by the abuse, she agreed to be interviewed on condition of anonymity.

A Bengali-speaking woman said that after strangers punched and sexually assaulted her after a break-in at her home in Queens, officers asked her 10-year-old child to interpret. Unwilling to traumatize the child, she did not divulge the sexual attack. And a Spanish-speaking woman, Josefina Ramirez, said that after an argument with her landlord, she called 911 for protection. A pair of officers ignored her request for interpretation, she said, and rifled through her pockets, taking her keys, and then ejected her from the building.

Ms. Ramirez, 57, said she spent the night wandering the streets of Bushwick, Brooklyn. “Instead of protecting me, they hurt me, she said. I understood nothing of what was going on.”

Victim advocates say these encounters and others like them show that for all its efforts and intentions, the Police Department is falling short of its goals, and of a 2008 mayoral order that requires it to provide non-English speakers with “meaningful access” to its services in the city’s most frequently spoken languages.

“It’s been a consistent problem,” said Dorchen A. Leidholdt, director of legal services at Sanctuary for Families, which serves more than 10,000 domestic violence victims a year, three-quarters of whom are immigrants. “It’s a critically urgent safety issue.”

Susan A. Herman, the department’s new deputy commissioner for collaborative policing, called language access “a very high priority,” saying that she has met with many community groups in recent months to discuss this and other issues. “We’re seeking continuous input from them about what they’re seeing on the ground.”

New York has worked to stay out in front. Under Mayor Michael R. Bloomberg, the police force became considerably more diverse. At the patrol level, about a third of the department is Hispanic. The number of officers of Asian descent has more than doubled since 2003. Since 2012 all of the department’s 50,000-plus employees, officers and civilians, have had access to a 24-hour telephone interpretation service that allows them to connect with operators fluent in more than 170 languages. At least 15,000 staff members speak a language other than English, including 8,895 who speak Spanish; about 1,260 are certified interpreters.

In the academy, cadets are briefed on the department’s language access program and once on the job they receive 20-minute refreshers three times each year. Signs advertising free interpretation are posted in every police station house and service area.