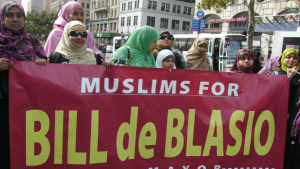 The liberal Democrat candidate who is the apparent front-runner for mayor of New York City has aroused a certain amount of concern over his statement that he would end the current level of normal scrutiny of Muslims by the NYPD.

The candidate has been using his squishy public safety stance to appeal to Muslim voters, who apparently don’t care about the place being blown up. The number of Allah worshippers is estimated to be anywhere from 800,000 to 1 million, so there are votes to be had by pandering against the general good.

As a young man, de Blasio traveled to Nicaraugua to help the Marxist Sandinistas, so that background is a hint about where he stands.

Since 9/11, the top priority of policing has moved to prevention of terror rather than arresting the perps afterward. That means surveillance and infiltration, which are not the most comfortable ways to pursue public safety in a free society, but diverse immigration has admitted many unfriendlies into our communities and now spying is what we must do.

Of course, the real solution is to end Muslim immigration and unwelcome the rest, since admitting potential enemies is bad public policy, period. There is nothing to be gained by Muslim immigration, only diverse new ways to decrease our freedom.

Democratic mayoral candidate Bill de Blasio told a group of Muslim supporters Wednesday that they won’t have to live in fear of being under constant surveillance if he’s elected mayor.

As WCBS 880?s Jim Smith reported, de Blasio, the front-runner in the Nov. 5 general election, said that, on his watch, NYPD surveillance tactics would only be authorized to follow up on specific leads and that the police force would be under the supervision of a new inspector general.

“The efforts of surveillance have to be based on specifically specific information, and obviously you need to go through a careful vetting process,” de Blasio said during a rally at Columbus Park in Downtown Brooklyn.

Based on internal NYPD reports and interviews with officials involved in the programs, the NYPD has conducted wholesale surveillance of entire Muslim neighborhoods, chronicling daily life including where people eat, pray and get their hair cut, according to a series of reports by The Associated Press. Police also reportedly infiltrated dozens of mosques and Muslim student groups.

In addition, the NYPD secretly labeled entire mosques as terrorism organizations, a designation that allows police to use informants to record sermons and spy on imams, often without specific evidence of criminal wrongdoing, according to the AP. END_OF_DOCUMENT_TOKEN_TO_BE_REPLACED