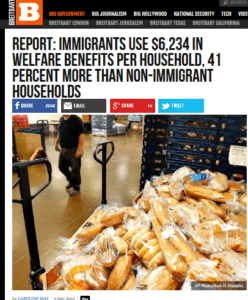 One of the first things you learn when you get involved in politics is that even ideologues don't really believe what they say. For example, leftists don't actually care about homosexual rights, feminism, the environment, or workers. They will gladly throw all those causes aside if it means screwing over white people.

For example, self-styled Tribune of the Plebs Michael Moore showed his true colors not long ago.

Unfortunately, many self-described "fiscal conservatives" operate the same way. They don't actually care about slashing the size of the government or even saving money, they just want to take out the populist, nationalist elements of the Right. And you can tell not just by what they say, but by what they don't say.

Immigrant-headed households use 41 percent more federal welfare benefits than their native-born counterparts, according to a new Center for Immigration Studies analysis of U.S. Census Bureau data...

[Report: Immigrants Use $6, 234 in Welfare Benefits per Household, 41 Percent More than Non-Immigrant Households, by Carolina May, Breitbart, May 9, 2016]

The study also found the region of origin of these immigrants strongly correlated with welfare use. As you've probably guessed, households from Central America and Mexico use more welfare than anyone else. Immigrants from Europe and South Asia actually use less than native households.

Electoral politics is about who, not what. But so is policy. If you are trying to control government spending but you simply will not acknowledge certain objective realities, you will fail. If "fiscal conservatives" actually want to limit government spending, they need to look at who is actually using these kinds of resources and take action to try to stop it.

But they won't. Far easier to whine about Donald Trump and try to get positive press in the left-wing media.