Serious national security experts say that the southern border is dangerously insecure, and Washington is in denial about the danger, ignoring Mexican narco-terrorism at America’s peril.

Texas border sheriffs participated in a press conference for the roll-out of a new report, Texas Border Security: A Strategic Military Assessment, written by Barry McCaffrey and Robert Scales who were also present.

The report warns that Mexico’s crime syndicates have escalated their aims and now want to control territory within the United States (as they already have succeeded in doing in southern Arizona) to make narco-business easier: “In effect, the cartels seek to create a “sanitary zone” inside the Texas border — one county deep — that will provide sanctuary from Mexican law enforcement and, at the same time, enable the cartels to transform Texas’ border counties into narcotics transshipment points for continued transport and distribution into the continental United States.”

Below, an illustration from the new report. 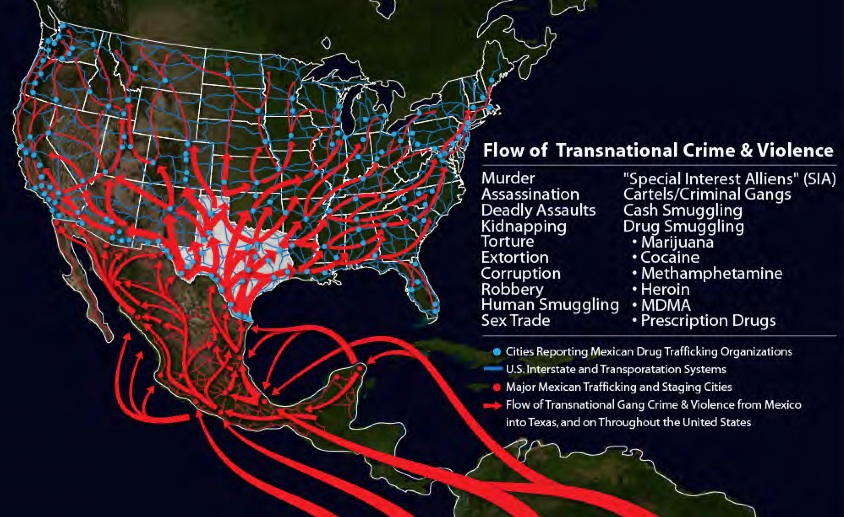 AUSTIN — From Texas Department of Agriculture – In an effort to protect U.S. citizens from spillover cartel violence while continuing to emphasize the critical need for enhanced Texas/Mexico border security, Agriculture Commissioner Todd Staples today released “Texas Border Security: A Strategic Military Assessment.” The independent study, co-authored by retired General Barry McCaffrey and retired Major-General Robert Scales, was unveiled as part of the Protect Your Texas Border Summit at the Capitol.

“Washington keeps telling us our border is more secure than ever, but this detailed military assessment, by two of America’s top generals, offers proof to the contrary,” Commissioner Staples said. “It’s time to shed the cloak of denial and protect our citizens and national security. Would Washington stand by and allow terrorists from Canada to make daily incursions into New York? The answer is a resounding, ‘No.’ We expect and demand that same level of protection in Texas. It’s time for Washington to uphold its constitutional duty to protect Americans on their home soil.”

Commissioned jointly by the Texas Department of Agriculture and the Texas Department of Public Safety, the report offers a military perspective on how to best incorporate strategic, operational and tactical measures to secure the increasingly hostile border regions along the Rio Grande River. It also provides sobering evidence of why Texas landowners and officials have called for increased federal support to defend our southern border.

“During the past two years, the southwestern United States has become increasingly threatened by the spread of Latin American and Mexican cartel organized crime,” said Gen. Barry McCaffrey (Ret.). “I congratulate Commissioner Staples for his vision in creating awareness of the inadequate attention paid to violence stemming from the drug cartels in Mexico and Latin America.”

“The violence and ongoing threat to our security reflect a change in the strategic intent of the cartels to move their operations into the United States,” said Maj. Gen. Robert Scales (Ret.). “American cities and rural areas now have Latin American drug, gun and human smuggling cartels operating inside our borders.”

Among the generals’ findings were:

• Living and conducting business in a Texas border county is tantamount to living in a warzone in which civil authorities, law enforcement agencies, as well as citizens, are under attack around the clock.

• Criminality spawned in Mexico is spilling over into the United States. Texas is the tactical close combat zone and frontline in this conflict. Texans have been assaulted by cross-border gangs and narco-terrorist activities.

• Federal authorities are reluctant to admit to the increasing cross-border campaign by narco-terrorists.

• One reason for this disparity between reported and actual cartel activity in Texas is that the 17,000 local and state law enforcement agencies that provide data to the Uniform Crime Reports (UCR) are not required to categorize these crimes as “drug related.”

• Reform at that operational level is dependent on bringing more “boots on the ground” to the fight for border security.

• Texas is the frontline in this escalating war and the potential consequences of success or failure will affect our entire nation.

To review the report in its entirety click here or go to TexasAgriculture.gov and click on popular links.

The 82nd Texas Legislature, via House Bill 4, directed the Texas Department of Agriculture to fund an assessment of the impact of illegal activity along the Texas/Mexico border on rural landowners and the agriculture industry. Commissioner Staples immediately partnered with the Texas Department of Public Safety to commission Generals McCaffrey and Scales for this important study.

General Barry McCaffrey is the former Director of the Office of National Drug Control Policy under President Bill Clinton and former Commander of all U.S. troops in Central and South America. Retired Major-General Robert Scales is the former Commandant of the United States Army War College.