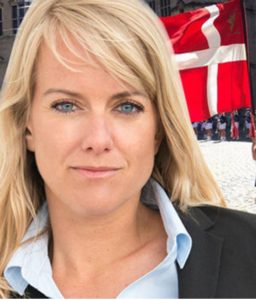 and provide a new challenge to the government in local elections later this year.

The 41-year-old leader of Nye Borgerlige or "The New Right" has called for stricter controls on migrants and refugees and wants a ban on headscarves in schools and public institutions.

Ms Vermund wants to limit Danish citizenship to people who "contribute positively" to society and have a job and only give asylum to refugees from the UN's refugee agency’s resettlement scheme.  [Meet Pernille Vermund, new Danish anti-migrant leader who wants OUT of EU & strong UK ties by Katie Mansfield; Daily Express, February 6th, 2017.]

I think someone should enlighten Ms Vermund about the motives and methods of the UN's refugee resettlement, er, … scheme.

That aside, I offer cordial greetings to our new member from the land of Hans Christian Andersen.  I sincerely hope her enterprise fares better than Andersen's heroines, who, if memory serves, mostly came to unhappy ends.