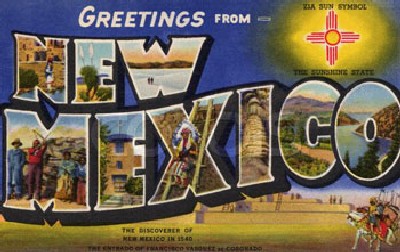 I happened to click over to C-SPAN on Tuesday, and was fascinated by what Congressman Steve Pearce (R-NM) had to say about a problem currently making many Republicans insane — how to appeal to the treasured Hispanic voter.

He is a Republican representative for a district that is 52 percent Hispanic and 34 percent Republican. He credits his electoral success with regular personal contact with as many of his constituents as can be reached, whatever their cultural or political leanings.

Not all of his policy ideas are positive, particularly how Pearce seems to favor a big increase in legal immigration, which is odd for someone from a dry region. Still, he has a recent immigration enforcement grade of A- from NumbersUSA.

But the important thing is that he does the work that members of Congress are supposed to do — meet with constituents to talk about their concerns.

Pearce drives around 100,000 miles a year to visit his physically large district, which is around 70,000 square miles, larger than the state of Florida. He goes to around 20 events a weekend and more during recesses. It’s not a magic formula, just hard work.

Last year, he encouraged Mitt Romney to visit more with Hispanics to show interest in their concerns, but the Presidential candidate couldn’t be persuaded.

Pearce says that an amnesty won’t win any Hispanic votes for Republicans. But his method of taking the conservative message in person to sometimes challenging audiences has proved to be a winner. Too bad Reince Priebus isn’t listening to such good advice.

Washington Journal invited Pearce to appear on the program because of a WSJ article from a few days ago discussing his work habits among the voters.

As the national GOP seeks to improve its dismal standing with Hispanic voters, the 65-year-old former oil man has some advice.

“You just have to show up, all the time, everywhere,” he said, during a recent barnstorm tour of his district, which sprawls across the southern half of this border state. “Most Republicans don’t bother. I do. I bother.”

Mr. Pearce has watched the national GOP struggle to understand why its low-tax, pro-business, family-values message hasn’t resonated with Latinos: Mitt Romney got the lowest share of the Hispanic vote of any GOP presidential candidate since 1996.

Many conservatives have since concluded that if the party can get immigration off the table, Hispanics will give the GOP a new look.

Mr. Pearce agrees, but he contends that changes in policy platforms aren’t enough to reverse the party’s decline among voters like those in his district. Republicans must spend time in Latino neighborhoods with the respectful attentiveness of a small-town mayor.

“We have to sell ourselves,” he said. It will take hard work, he added, because the majority of Hispanics are “spring-loaded” to favor the Democrats and their more expansive view of government.

Some party leaders are taking note of Mr. Pearce. The Republican National Committee has formed a committee to lay out a new election strategy, with South Carolina committeeman Glenn McCall in charge of reaching out to minority voters.

“What Steve Pearce is doing in New Mexico is what we need to do everywhere,” said Mr. McCall. “We have to learn to work for every vote.”

Mr. Pearce’s success among voters here, even those who disagree with him, underscores the hope and the difficulty of the task. Mr. Pearce said he logged more than 90,000 road miles in his district last year, a travel regimen that often separates him from his wife for weeks.

When describing his brand of constituent service in a district that is larger than the state of Florida, Mr. Pearce said, “I see myself as a big windshield wiper, just working my way back and forth, back and forth.”

Democrats, who view Mr. Pearce as a prime target for the 2014 midterm election, are recruiting potential challengers.

“I don’t know if there’s been a politician in New Mexico more out of touch with the state or his district,” said Javier Gonzales, chairman of the state Democratic Party.

But Mr. Pearce’s opponents will need to do more than just wave the party flag. Bald and bespectacled, he has won the southern half of New Mexico five times since 2002. In November, he nabbed around 42% of the Hispanic vote, or nearly twice what Mitt Romney received nationally, and better than Republican Susana Martinez’s share when she won the New Mexico governor’s race in 2010, according to various polls.

No non-Hispanic House Republican represents a district with a higher percentage of Hispanics. Fewer than four in 10 residents of the district are Anglo, and registered Democrats outnumber Republicans by six percentage points.

The congressman counts on the support of such constituents as Rose Garcia, a Las Cruces housing activist and lifelong Democrat, who said she voted for Mr. Pearce and President Barack Obama in November.

Ms. Garcia showed up an hour after sunrise on a Saturday morning to discuss immigration with Mr. Pearce and local leaders at Roberto’s restaurant, which claims to be the home of the world’s largest enchilada.

If the U.S.-Mexico border can be secured, a formidable challenge, Mr. Pearce said he supported granting work permits to the 11 million or so immigrants now in the U.S. illegally. But if they want to become citizens, he said, they will have to leave the U.S. and “get in line like everyone else.”

After he spoke, Ms. Garcia pointed out that Mr. Pearce holds many positions that differ from her own view, including on immigration reform. He also opposes abortion rights, gay marriage and the federal health-care law. At the same time, she said, his message of self-reliance appeals to her.

“In some ways, I am a true conservative, particularly in my view that people should look after themselves and raise themselves up,” said the 69-year-old Ms. Garcia, who has worked in the Las Cruces community since the early 1970s.

Also important in earning her support, she said, was how closely the congressman watched over the state’s Second Congressional District. On a sweltering afternoon last summer, she recalled, Mr. Pearce showed up unexpectedly as eight Latino families were moving into new homes they had bought with the help of Ms. Garcia’s nonprofit housing organization, Tierra del Sol.

When he saw a woman unloading furniture from a truck, “he took off his jacket and tie and jumped into the truck to help,” Ms. Garcia said. “And it wasn’t just a photo op. He kept at it for more than an hour.”

Mr. Pearce’s appearance at Roberto’s restaurant was one of nearly 20 sit-down talks with constituents that he held during a two-day swing that took the congressman to seven towns across 500 miles, a pace he continued for another week.

He met with farmers and other residents in the Pancho Villa Dance Hall in the border town of Columbus. He drove for hours, much of it on rutted dirt roads, to have lunch with ranchers and talk about border security in the remote Boot Heel region of the state, where Geronimo made his last stand.

On one stop during his trip, Mr. Pearce sat down with a youth group he helped organize in the almost-entirely Hispanic town of Anthony, tucked among pecan groves, not far from El Paso, Texas. He mussed the hair of some of the children and remembered their first names.

Community organizer Ana Artalejo, who had come with her two daughters, said she was amazed by the attention Mr. Pearce has shown her town of 9,700 residents, which he has visited roughly 10 times in the past year.

When the town decided to clear a garbage-clogged ravine, he arranged a backhoe. When the youth group organized a cleanup day, he sent gloves and rakes and got the local trash company to donate refuse containers.

In return, Ms. Artalejo campaigned for the congressman last fall, sending teams to knock on doors. “I am a hard-core Democrat and disagree with him on many things,” she said. “But he is the only Republican I have ever voted for.”

Ms. Artalejo and others say part of Mr. Pearce’s appeal is his down-to-earth manner. He grew up poor just miles from the Texas border in the far eastern New Mexico oil town of Hobbs, where his dad worked as roustabout. He speaks with the broad twang of West Texas. “I grew up in a place,” he joked at one stop, “where we talk like Texans and walk bowlegged like Texans.”

Democrats here say Mr. Pearce’s record puts him at odds with the majority of his district, and that the only thing that has saved him has been low turnout among Democrats and independents.

Mr. Pearce favors drug tests for welfare recipients. He opposed the Dream Act, which would have helped the children of illegal immigrants gain legal status. He voted against the fiscal-cliff budget deal and was one of just nine House Republicans to oppose the re-election of John Boehner as House speaker.

The Boehner vote is one of several maverick positions that have made Mr. Pearce persona non grata among the GOP House leadership. As a result, Mr. Pearce complained, he has been kept out of GOP discussions about overhauling the immigration system, despite being the sole House Republican serving a district on the U.S.-Mexico border. Speaker Boehner’s office declined to comment.

The job for Democrats is finding someone to challenge Mr. Pearce locally. Las Cruces Mayor Ken Miyagishima said the Democratic Congressional Campaign Committee in Washington has urged him to run next year.

But Mr. Miyagishima, whose father is Japanese and his mother Mexican-American, is skeptical. “I’d have to see the polling first,” he said, adding that Mr. Pearce “is a guy who has no fear. He goes everywhere and says whatever he wants.”

Mr. Pearce has taken some of his cues from the former Texas governor, George W. Bush, who made a special push to win Hispanic votes by campaigning and advertising in predominantly Latino regions. In 1998, Mr. Bush got nearly half the Latino vote in Texas.

During last year’s presidential campaign, Mr. Pearce lured Mr. Romney to Hobbs, where the GOP presidential nominee rolled out his energy plan last fall. But Mr. Pearce said he failed to persuade Mr. Romney “to get out and really mix it up in the Hispanic community.”

Mr. Pearce said he kept telling Mr. Romney and his staff, ” ‘C’mon, man, get out there. Talk about it. Do it.’ But they never did.”