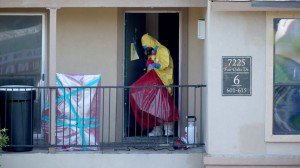 The worker at the Texas Health Presbyterian Hospital had been wearing protective gear during treatment of the patient Thomas Eric Duncan, who died last week…

"This individual was following full CDC precautions, which are barrier and droplet so gown, glove, mask and shield," Dan Varga, the hospital's chief clinical officer told a news conference in Dallas.

"We're deeply concerned about this new development," Dr. Thomas Frieden said in an interview on CBS' "Face the Nation" on Sunday. "I think the fact that we don't know of a breach in protocol is concerning because clearly there was a breach in protocol."

Huh? This breach of protocol spin is getting top billing in the mainstream MSM. But it is just a distracting detail, not the real issue.

This is a good time to repeat: Ebola Strikes America: Bad Immigration/Refugee Policies To Blame

America is at risk because of foolish and irresponsible immigration and refugee policies. If these were not so faulty, this risk would not be significant.

Apparently as Thomas Martel reported last night in Will Ebola Make America The Quarantine Camp of the Saints?  Frieden is an Open Borders ideologue

In a strange non sequitur, Frieden [Email him] attacked the idea of a travel ban by linking it to a border security fence.

A travel ban is not the right answer.  It’s simply not feasible to build a wall – virtual or real – around a community, city, or country.

who is strangely unaware of Israel’s success.

Bullying peaceable New Yorkers is congenial. Interdicting the influx of foreign Blacks is not.

This is a clear case of Hitler’s Revenge. Frieden needs to go before his ideology does even more damage.

Barack Hussein EbolaCamp Of The Saints
<< Previous
Next >>
LATEST