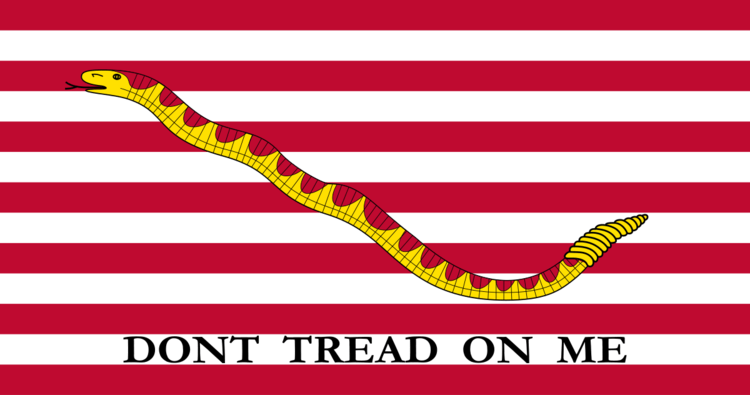 The Navy Jack is the ‘don’t tread on me’ flag, one that has earned a revered place in America’s naval history…This symbol of America’s naval ferocity has spanned our country’s entire existence, flying from the masts of the Continental Navy during the war of independence, to today’s War on Terror….

During my two deployments to Iraq, “Don’t Tread on Me” was a phrase seen on nearly every uniform and platoon space — including mine.

On October 22 an email ordered the Navy Seals to stop wearing this symbol, which many had exerted the option to do.

When a friend of mine asked his leadership the same question, he was told, “The Jack is too closely associated with radical groups.” We must assume that this thought policeman embedded in the SEAL community is speaking of the Tea Party, whose flag (which also dates from the American Revolution) depicts a snake with the same defiant slogan as The Navy Jack.

and ridicules this. And of course it is ludicrous that the US Navy should give up a symbol which has always incontrovertibly been theirs, whoever else uses something like it.

But my answer to his question

Why would our leaders sell out our heritage?

remains the same as I proposed yesterday in The Gettysburg Address: Not Heritage For Obama's Nation.

This is deeper than petty party rivalry. The nation which the Obamacrats give their allegiance  has no connection to the historic American nation the symbols of which they loath and will take every chance to eradicate. Peter Brimelow has called it Anti-America

They are a Minority Occupation Government