NATIONAL REVIEW Condemns Mentioning Garbage, Rats, In Black Neighborhoods, But WFB Hammered On It In ’65

National Review is shocked that President Trump should tell the truth about conditions in Baltimore:

During the Ford administration, Don Penny, a Hollywood comic, was brought into the White House communications office to improve the president’s wooden delivery. After one trying session, Penny said, “Mr. President, these are words. They mean something.” That was a joke meant to cure Gerald Ford’s inarticulacy. It bears repeating, to cure Donald Trump’s rhetorical recklessness. In his latest drama-inducing Twitter riff, the president said that the district of Representative Elijah Cummings, the Maryland Democrat, was a “filthy place,” a “disgusting, rat and rodent infested mess” where “no human being would want to live.” Of course, human beings do live there, and the president is responsible for the whole of the United States, not just the parts he likes. It is certainly true that most big cities, including Baltimore, which Cummings represents about half of, have been badly governed for a long time, mainly by Democrats. There is a way to have this kind of discussion — and many others — more responsibly, respectfully, and usefully, but it would require the president to pay much greater heed to the value of his own words.[The Week, August 8, 2019] 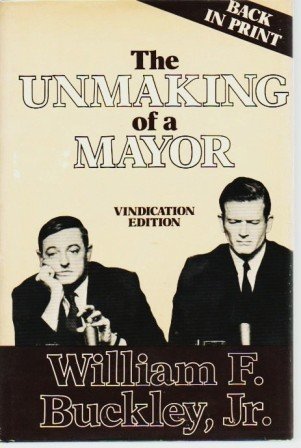 Of course, the President isn't responsible for the garbage-strewn, rat-infested streets of Baltimore. That's a local responsibility. In fact, the only thing Trump is in a position to do is what he did do: try to shame the locals into doing something themselves.

William F. Buckley would have approved. During his campaign for mayor of New York in 1965, he spent what seemed like a lot of time talking about the habit of the residents of the Harlem slums of throwing garbage out of their tenement windows into their own streets.

This is how he put it during a campaign event in July of 1965, as reported in his campaign memoir The Unmaking Of A Mayor, p. 167:

What is it a government is supposed to do, for instance — you tell me—to keep people from throwing garbage out of their windows in Harlem? I asked James Baldwin why some people do that, and he said “Why that's a form of social protest.” This is an answer that is inexplicable to me. Why should people throw garbage out their windows?—in order themselves to wallow in it? You don't wallow in it. I don't wallow in it. But why excuse the fact [that some people do]? The Mayor of New York has got to be modest in his pretensions. He must not approach the Negro people and say “I will transform your life.” He must say, “I will give you justice and opportunity, and then it is up to the moral leaders of the community....

This was called racist, of course, especially for the word "wallow", but not by 1965 National Review, of which Buckley was the editor. Gore Vidal was still bashing Buckley with this quote three years later in their televised debates.

Vidal wrote "During a television exchange with Buckley, James Baldwin blamed the white owners of the black slums for their condition. Buckley's' response: And I suppose the white landlords go pitty-pat uptown and throw the garbage out the windows."

I can't say if that's word for word accurate, but Buckley did write in a 1965 syndicated that he was on a TV show with black Civil Rights intellectual Baldwin, and when he mentioned throwing garbage out of windows, Baldwin tried to justify it as a protest.

The Weekly Standard brought this up in the context of an anti-racist rally in Jesse Jackson's garbage-strewn Chicago.

In the mid-1960s, William F. Buckley had a famous debate with James Baldwin in which Baldwin remarked that, in Harlem, black people threw garbage out their windows for purposes of "protest." Buckley, incredulous, replied that this was no protest at all but merely self-injury.

This debate repeated itself last week on the Chris Rock Show. Chris Rock is a black comedian who has little patience with black-establishment orthodoxy. He greeted his guest, Jesse Jackson, with a provocation: "What do you do, Jesse? I mean, we see you at the rallies . . ." (Jackson responded, " I fight for freedom. I fight for the American dream.") Rock went on to observe that, at a rally in Chicago led by Jackson and Al Sharpton, "Brothers were marching . . . past garbage. Of course, the white people ain't giving you a damn thing -- why don't you clean up your f-- house? . . . If we straightened out ourselves, people would deal with us as human beings."

Jackson echoed Baldwin: "If you live in a certain area of town where they cut off access to capital, and cut off access to jobs -- "; but Rock would have none of it: "That don't mean you can't pick up a damn piece of paper in front of your house." No, it doesn't. Sometimes farce repeats itself as history.

Trump was attacking Cummings because Cummings said Trump was keeping illegals in bad conditions. Cummings's Baltimore constituents are in worse conditions, but of course, it's really their own fault. It's not "racism" or redlining that make a slum.