Nate Silver in 2009 v. a proto-Mommy Blogger in 1989: Who Was More Right About Baseball Steroids? 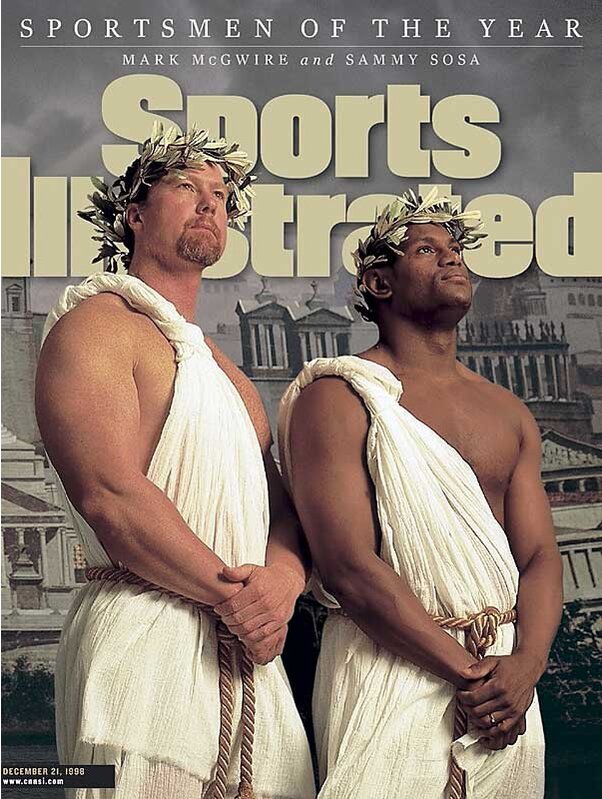 Nate Silver, whose book I review here, is approaching the totemic status of Charles Darwin as a signifier of Science, Honesty, and the Triumph of the Democrats. This isn't his fault, but it's hard to avoid playing to the crowd of worshippers. Here, for example, is Silver's latest work of self-congratulation for Democrats: In Silicon Valley, Technology Talent Gap Threatens G.O.P. Campaigns. So, it's worth documenting this former professional baseball forecaster's strikingly terrible track record at noticing the biggest thing happening to baseball statistics in his lifetime: performance enhancing drugs.

I've always been interested in the effects of steroids since they are artificial male hormones and thus hugely relevant to the debate over feminism and whether sex differences are biological or cultural. Thus, I wrote a 1997 article for National Review called Track and Battlefield that reviewed track statistics for insights into the debate over Coed Combat. In it, I sketched out the history of steroids' impact on track statistics ... five years before Silver started writing about baseball statistics. I'd been following the impact of steroids on track and on baseball since the 1980s. The main difference between the sports was that track tested and occasionally caught cheaters, while baseball didn't test. My article came out the year before Mark McGwire and Sammy Sosa made a travesty of baseball statistics and five years before Silver started publishing on the talent of ballplayers.
For example, here was the cover of the 1998 Sports Illustrated Sportsman of the Year issue. And this is what SI burbled:

"As is our custom late each fall, we at Sports Illustrated sat down to discuss nominations for the Sportsman of the ... No, we didn't discuss. We didn't even sit down. It was automatic. It was unanimous. It was the easiest selection in our history. It couldn't be one Sportsman of the Year. It had to be two. Mark McGwire and Sammy Sosa. All in favor, say aye. All opposed, report back to your coma."

"McGwire and Sosa gave America a summer that won't be forgotten: a summer of stroke and counterstroke, of packed houses and curtain calls, of rivals embracing and gloves in the bleachers and adults turned into kids — the Summer of Long Balls and Love. It wasn't just the lengths they went to with bats in their hands. It was also that they went to such lengths to conduct the great home run race with dignity and sportsmanship, with a sense of joy and openness. Never have two men chased legends and each other that hard and that long or invited so much of America onto their backs for the ride."

In October 1998, Stephen Jay Gould had written a similar article in the Wall Street Journal: "A Happy Mystery to Ponder: Why So Many Homers?" I sent the famed science writer and Harvard professor a fax explaining that McGwire had already been caught back in August with a steroid precursor called Androstenedione in his locker, and that McGwire and Sosa were both obvious juicers. But, for some reason, he did not respond.

So, the impact of steroids was a big, big deal in American culture long before Silver got involved professionally writing about baseball statistics. Yet, he didn't seem to have much to say about steroids online until positive test results for performance-enhancing drugs started to leak out after a few years of Silver being in the business of forecasting performance. And, even then, for the next five years Silver kept being creatively but consistently wrong about the impact of steroids.

In May 2009, 21 years after Tom Boswell accused Jose Canseco of using steroids, slugger Manny Ramirez, who had finished the 2008 season by hitting an improbable .396, got caught by a drug test and suspended for 50 games. In response, Silver wrote in Baseball Prospectus about how surprised he and the whole sabermetrics community were:

In fact, Ramirez was frequently taken to be the counter-example, the guy who, come hell or high water, absolutely was not on steroids. He was so much of a freak that we assumed his hitting talents must have been freakish too — God-given ability, and not the result of any sort of chemical intervention.

The problem for Silver with a superstar like Ramirez getting caught was that it shot a hole in the theory Silver had been promoting ever since positive tests started being leaked to the media in the mid-2000s: that the real juicers were the scrubs, not the superstars putting up all the seemingly ridiculous statistics:

The typical steroid user might not be the prima donna slugger who endorses Budweiser between innings but the "hardworking late bloomer" who is struggling to maintain his spot in the lineup or is trying to leverage a good season into a big free-agent contract. Certainly these players might have more economic incentive to enhance their performance, as compared to their counterparts who have already signed multiyear, guaranteed major league contracts.

Hence, Silver predicted in 2005 after having to respond to positive test results:

There is clearly something going on—but it is not producing the sort of predictable impacts that everyone expects. Nor, because of the complexity of the underlying chemistry, are we likely to see substantial changes in the game's statistics resulting from efforts to curtail use of these substances.

Well, Silver turned out to be really wrong: offensive statistics have cratered since then due to drug testing.

In contrast, the impact of steroids on superstar Jose Canseco, the "Typhoid Mary of steroids," was obvious back in the 1980s to novelist Anne Lamott. That the Oakland A’s were up to no good during the 1989 World Series was so blatant that it even featured in the bestseller Operation Instructions: A Journal of My Son’s First Year by proto-mommy blogger Anne Lamott:

I was explaining to [my baby] Sam that Jose Canseco shouldn't get to play because of the obvious steroid use, that there is something really wrong with the guy ... It was obvious from Sam's expression that he didn't think much of Canseco.

Why could a lady novelist taking care of her first-born notice what Nate Silver wouldn't?

She wasn't being paid to not notice.