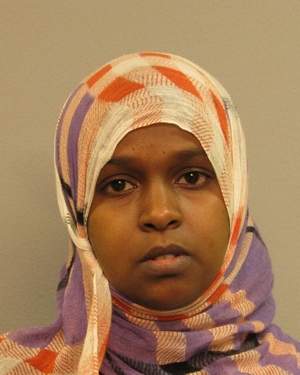 Amal Ahmed Abdullahi, a 29-year-old employee of Dell in Nashville, was arrested Friday for warning a co-worker that as an infidel he deserved to die and she was just the Muslim to blow him away.

Abdullahi is not identified beyond being a “Nashville woman” by the Tennessean newspaper, but a filmed news report (below) says she is a Somali immigrant. That’s not surprising, since the heartland has been under assault via Islo-immigrants by foreign and US Islamists against the American Bible belt, lately spearheaded by the Murfreesboro mega-mosque.

Little background on the threatener is given, yet the Nashville police spokesman said the case is “not reflective of Nashville’s Muslim community.” (Actually, there’s been a lot of hostile activity in that area.) He didn’t use the word “backlash” but meant to deflect concerned citizens capable of pattern recognition from drawing a rational conclusion — that Muslim immigration is a danger for public safety and national security.

A Nashville woman was charged with attempted terrorism Friday after investigators said she threatened to hurt co-workers at the South Nashville Dell facility last weekend.

The trouble began when a CEVA Logistics employee said his co-worker Amal Ahmed Abdullahi, 29, of Zermatt Avenue, approached him during his shift last Saturday.

According to a release from Metro police, Abdullahi told the employee that “her people were dying for Allah every day; that she was ready to die for Allah; that this whole country will be Muslim soon; that this country is full of non-believers and that this place (her work place) is full of non-believers; that all unbelievers should die; that her life starts after death; that her life is not here, nobody pays attention to her and she should pick up a gun and shoot all these people.”

CEVA Logistics signed the arrest warrant as the prosecutor against Abdullahi, accusing her of intimidating/coercing a civilian population.

Metro police spokesman Don Aaron said Friday that he was not immediately aware of anyone previously being charged with attempted terrorism in Nashville.

“In the times in which we live, statements such as the ones alleged to have been made in this case are not ignored,” he said.

Metro police were notified of the incident on Thursday and brought Abdullahi in for questioning on Friday.

At first, she denied the conversation but later admitted to talking about a religious topic with her co-worker, police said. She is being held at the Metro Jail on a $50,000 bond and is scheduled to appear in court at 9 a.m. Wednesday.

David Raybin, a prominent Nashville defense attorney, said police acted correctly in the case, but he questioned the charge, which is listed as a class A felony on the affidavit against Abdullahi.

“If you commit a consummated crime, it’s a class A felony, but if it’s an attempt, it’s one click down; it would be a class B felony punishable by eight to 12 years in prison if convicted,” Raybin said, adding that the police had probable cause to arrest Abdullahi because of the possible threat. But, Raybin said, to constitute an attempt, a person has to do something beyond making statements.

“In an attempted bank robbery, people buy guns and plan the crime,” he said. “For an attempt, you have to have an action. In this particular case, it is a really close question as to whether it constitutes an attempt. I think we have some species of assault here. She said she ’should’ do something, not that she ‘would’ do something. If she had said ‘would,’ then you would be much closer to having a terroristic threat.”

Under Tennessee code, assault by intimidation, which Raybin says he believes to be the correct charge for Abdullahi, is a class A misdemeanor.

“The intent to use a weapon could run it up to a felony, but that would be a stretch,” he said.

Shock over arrest
Still, news of the arrest was enough to send shock waves through Nashville’s Muslim community.

“We are very saddened to hear this, that one of our people acted this way,” said Amir Arain, spokesman for the Islamic Center of Nashville. “Islam condemns violence of all forms and condones peaceful coexistence and love for our neighbors..”

“It is important that everyone understand this is a prosecution of one individual and is absolutely not reflective of Nashville’s Muslim community,” he said. “We believe the allegations as presented to us, and the company’s desire to prosecute, warranted today’s arrest action. At the same time, no other arrests are anticipated.”