Muslims consider the canine species to be unclean, and will claim that they are offended by even a mere picture of a dog, like the pup featured in police PSA in Scotland. But it's not like the Sons of Allah are being forced to lick Fido's bowl clean: Muslims outraged at police advert featuring cute puppy sitting in policeman's hat (Daily Mail UK, July 1, 2008).

The choice of image on the Tayside Police cards - a black dog sitting in a police officer's hat - has now been raised with Chief Constable John Vine. 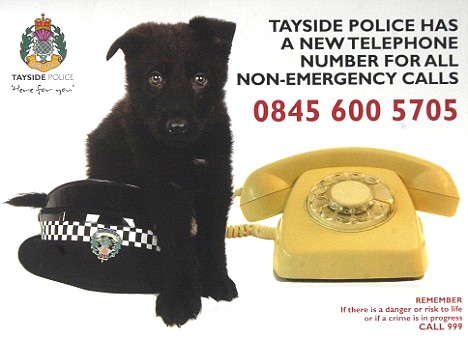 Sadly, the police department responded with predictable political correctness to the attack on British values: Apology over 'offensive' puppy police advert after Muslim complaints (Daily Telegraph UK, July 1, 2008). At least there was some defense heard for the friends of furry tail-waggers.

Tayside Police have admitted they should have consulted their 'diversity' officers before issuing the cards, but critics argued their apology was unnecessary.

Richard Cook, director of the Campaign Against Political Correctness in Scotland, said: "Britain is the greatest dog-loving country in the world."

In fact, the very first Society for the Prevention of Cruelty to Animals was organized in England in 1824, primarly to protect carriage horses which were poorly treated at the time. So the English have historic credibility in animal welfare and certainly are fond of their dogs. They shouldn't put that fine tradition aside in order to appease hostile Muslims.

FYI, the Tayside Pollice Department has several smile-producing pages about its doggie contingent, including a puppy training diary of Rebel the black shepard with lots of cute pictures of him as he has grown up. Plus, there is a contact page for the dog section, so you can leave a comment about the current controversy if the spirit moves you...