The propensity of muslims to riot over the tiniest slight is well known, but the recent blow-up is over the edge: President Trump announced that the US now recognizes Jerusalem as the capital of Israel and the usual Muslo-punks run amok from Afghanistan to the West Bank, as they predictably hop campfires, throw stones and rip flags. 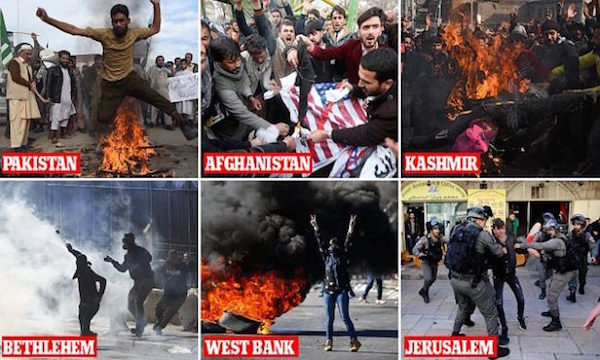 Who knew that the US had the power to bestow the official capital on foreign nations?

On Tuesday, the capital of Israel was Jerusalem, and no big deal.

On Thursday and afterwards, the capital of Israel was still Jerusalem and the local Muslims riot over the non-change.

Back in Realville, the government of Israel is located in Jerusalem, including its ministries, the Knesset legislature, the high court. The locale of a nation’s government is its capital by definition, a standard fact everywhere. The Palestinians just like an excuse to go berserk and destroy stuff.

Unfortunately, America’s undiscerning immigration system has welcomed Palestinians along with many other unfriendlies. The number of Palestinians is estimated to be somewhere over 85,000 by the Census. 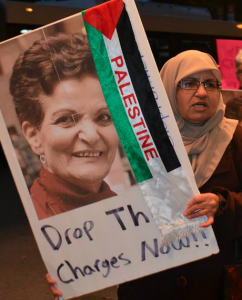 One undesirable Palestinian admitted was the convicted double murderer Rasmieh Odeh who was hired as an Obama Navigator. After interminable years of legal wrangling, she was finally deported on September 20, 2017, for immigration fraud. The photo on the right shows a Palestinian resident of the US holding a photo of the murderer Odeh in support. In fact, a search for Odeh Support gets 362,000 hits, showing the backing of Muslim immigrants for the killer.

Anyway, back to the Jerusalem fracas: Friday prayers had an energizing effect on rioting — funny how the Friday people are different from the Saturday and Sunday people:

JERUSALEM/GAZA (Reuters) – At least two people were killed in clashes with Israeli troops on Friday when thousands of Palestinians demonstrated against U.S. President Donald Trump’s recognition of Jerusalem as Israel’s capital and the Palestinian president said Washington could no longer be a peace broker.

Across the Arab and Muslim worlds, thousands more protesters took to the streets on the Muslim holy day to express solidarity with the Palestinians and outrage at Trump’s reversal of decades of U.S. policy.

Israeli soldiers shot dead a Palestinian man near the Gaza border, the first confirmed death in two days of unrest. Scores of people were wounded on the “Day of Rage”. A second person later died of their wounds, a Gaza hospital official said.

The Israeli army said hundreds of Palestinians were rolling burning tyres and throwing rocks at soldiers across the border.

“During the riots IDF soldiers fired selectively towards two main instigators and hits were confirmed,” it said.

More than 80 Palestinians were wounded in the occupied West Bank and Gaza by Israeli live fire and rubber bullets, according to the Palestinian Red Crescent ambulance service. Dozens more suffered from tear gas inhalation. Thirty-one were wounded on Thursday.

As Friday prayers ended at the Al Aqsa mosque in Jerusalem, worshippers made their way toward the walled Old City gates, chanting “Jerusalem is ours, Jerusalem is our capital” and “We don’t need empty words, we need stones and Kalashnikovs”. Scuffles broke out between protesters and police.