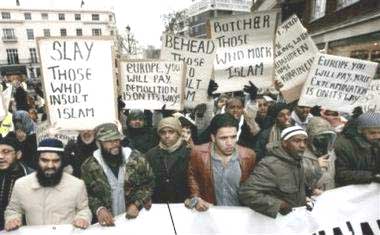 The woman who suggested ”Everybody Draw Mohammad Day” in support for the edgy South Park show has felt the wrath of hostile Muslims who believe that anyone who insults their religion should be killed.

The diversity extremists who believe the equality of all cultures tend to overlook Muslims’ hatred of free speech when it is applied to their precious Islamo-totalitarianism.

Free speech comes under attack in the West wherever Muslims have immigrated and reached a critical mass. You only have to look at Europe to see that. Sadly, intimidation works, particularly when backed up with actual deaths, like Dutch filmmaker Theo van Gogh who was murdered on an Amsterdam street as he biked to work because of his work critical of Islam’s treatment of women, specifically the film Submission.

Danish cartoonist Kurt Westergaard, who drew Bomb-Turban Mohammad, had a close call earlier this year when a Somali broke into the artist’s home with an axe. Only a secured safe room saved him from being hacked to death.

There are many other examples of Islam’s hatred of free speech, but I don’t have time to write a book.

America can have traditional free speech where nobody fears for their life because of a critical cartoon, or we can have Muslim immigration – but not both.

The Seattle cartoonist whose artwork sparked the controversial ”Everybody Draw Muhammad Day!” has gone into hiding at the advice of the FBI after being targeted by a radical Muslim cleric, according to the newspaper that published her comics.

Molly Norris has moved and changed her name, the Seattle Weekly said Wednesday, after U.S.-born Yemeni cleric Anwar al-Awlaki placed her on an execution hit list. Awlaki – who has been linked to the botched Times Square bombing and cited as inspiration for the Fort Hood massacre and a plot by two New Jersey men to kill U.S. soldiers – reportedly called Norris a ”prime target” for assassination and that her ”proper abode is hellfire.”

Funny how being raised in the United States didn’t give jihadist Anwar al-Awlaki more of an appreciation for free speech. Apparently that assimilation thing didn’t overcome the mosque teachings to hate and kill the infidel.