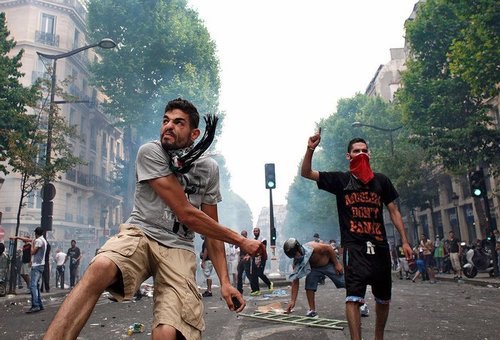 Muslim Mass Migration: Is It Good for the Jews?

With Muslim terrorists committing anti-Semitic massacres in France and Denmark earlier this year, and Middle Eastern and African youths routinely harassing Jews on the street in European cities, one might think that facilitating another massive influx of Muslims, along with all the chain migration to follow, would be considered not good for the Jews.

Some Eastern European countries have offered to accept persecuted Syrian Christian refugees, but not Muslims. You might think that would be considered a reasonable compromise good for the Jews, right?

Hungary’s prime minister, Viktor Orban, was criticized online and in person on Thursday for writing in a German newspaper that it was important to secure his nation’s borders from mainly Muslim migrants “to keep Europe Christian.”

“Those arriving have been raised in another religion, and represent a radically different culture. Most of them are not Christians, but Muslims,” Mr. Orban wrote in a commentary for Frankfurt Allgemeine Zeitung, a German newspaper. “This is an important question, because Europe and European identity is rooted in Christianity.”

“Is it not worrying in itself that European Christianity is now barely able to keep Europe Christian?” Mr. Orban asked. “There is no alternative, and we have no option but to defend our borders.”

Before meeting with Mr. Orban on Thursday in Brussels, Donald Tusk, the president of the European Council, which represents European Union leaders, thanked him for securing Europe’s borders, but took issue with the argument of Mr. Orban’s opinion article.

“I want to underline that for me, Christianity in public and social life means a duty to our brothers in need,” Mr. Tusk said as he stood alongside Mr. Orban.

“Referring to Christianity in a public debate on migration must mean in the first place the readiness to show solidarity and sacrifice. For a Christian it shouldn’t matter what race, religion and nationality the person in need represents.”

Mr. Tusk, a former prime minister of Poland, drew attention to his rebuke of the Hungarian leader on social networks, and his office posted video of his comments on YouTube.

Mr. Orban waited until the end of the day to respond to Mr. Tusk. At a separate news conference in which he faced reporters alone, he reiterated the theme of his article, that Europe was at risk of being “overrun” and had to shut its borders. The Hungarian prime minister argued that European countries had no obligation to accept most of the migrants, as “the overwhelming majority of people are not refugees because they are not coming from a war-stricken area.”

“Our Christian obligation is not to create illusions,” he said. …

Mr. Orban’s formulation echoed notorious remarks made by the poet T.S. Eliot in 1933, another moment in history when Europeans expressed fears of being overwhelmed by a “flood” of non-Christian immigrants.

The highest priority must always be to defeat the real enemy, T.S. Eliot. 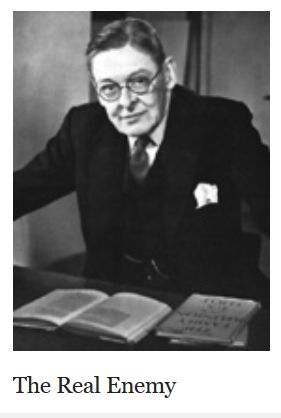 Of course, you can’t stop T.S. Eliot in the past without getting a few more kosher supermarket shoppers and bat mitzvah security guards murdered by Muslim thugs in the future. But the deaths of these Jews will, apparently, be a small price to pay for not having to consider whether diminishing marginal returns have started to set in for our era’s dominant ideological obsessions.

Thus, from the New York Times once again:

BUDAPEST — In Hungary, hundreds of migrants surrounded by armed police officers were tricked into boarding a train with promises of freedom, only to be taken to a “reception” camp. In the Czech Republic, the police hustled more than 200 migrants off a train and wrote identification numbers on their hands with indelible markers, stopping only when someone pointed out that this was more than a little like the tattoos the Nazis put on concentration camp inmates.

“It was horrifying when I saw those images of police putting numbers on people’s arms,” said Robert Frolich, the chief rabbi of Hungary. “It reminded me of Auschwitz. And then putting people on a train with armed guards to take them to a camp where they are closed in? Of course there are echoes of the Holocaust.”

Europeans are facing one of the Continent’s worst humanitarian crises since World War II, yet many seem blind to images that recall that blackest time in their history.

This migrant crisis is no genocide. The issue throughout the Continent is how to register, house, resettle or repatriate hundreds of thousands of migrants and refugees, a daunting logistical challenge. But perhaps not since the Jews were rounded up by Nazi Germany have there been as many images coming out of Europe of people locked into trains, babies handed over barbed wire, men in military gear herding large crowds of bedraggled men, women and children.

At the same time, the images may reveal a deeper truth about Europe and its seeming unpreparedness for a crisis so long in the making: While extolling the virtues of human rights and humanism, it remains, in many parts, a place resistant to immigration and diversity.

As a result, some here are reacting in ways that recall some of the Continent’s darkest impulses.

“They must be oblivious because who would do that if they had any historical memory whatsoever,” said Kenneth Roth, executive director of Human Rights Watch. “It’s amazing, really. Certainly those images of the trains can’t help but conjure up nightmares of the Holocaust.”

Rabbi Frolich was especially struck by the lies used to manipulate the migrants.

“They tell them that the train was going to Austria and then take them to a camp instead,” the rabbi said. “I don’t think the police got instructions from the government to do it this way, but it is very similar to what happened to Jews in the 1940s.”

Jan Munk, chairman of the Jewish Community of Prague, was inclined to be generous in his interpretation of the episode.

“I understand the reasons why the police marked migrants with numbers,” he said. “They are under a lot of pressure and stress and simply did not realize the connotations it would have. It was indeed tasteless and reminded me of the numbers at Auschwitz, but I know it was not done on purpose.”

But for others, the fact that it was not done on purpose was even more frightening, showing a puzzling historical disconnect in many of the very places that the Holocaust caused the deepest devastation.

“It may be correct that they didn’t know, but the insensitivity and the ignorance of the imagery their actions evoked is stunning; it’s just sickening,” said Jonathan Greenblatt, national director of the Anti-Defamation League, in New York.

The T.S. Eliot Menace is the important thing, not the future of Europe.

But those who control the present may not actually get a future they will like if they are so focused upon symbolically smiting their enemies of the past that they blind themselves to learning from the present.