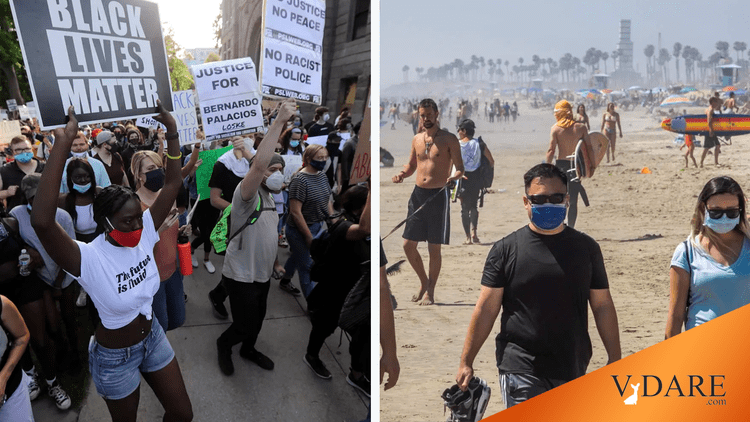 MSM Will Hammer Beachgoers Over Covid Risks, But Black Rioters Are Immune...To Criticism, At Least

When middle America became restless over the forever lock downs, breathless admonitions about the coronavirus catastrophe about to brought down on the country showed up in every article the corporate media put out, on the timelines of all the blue checkmarks, and in the public pronouncements of the legions of stern-faced labcoats.

When protests and riots dwarfing the lock down lamentation turnout in size, scope, and density erupted in cities all across the country following George Floyd’s death, the hysterical heralding of the end times stopped at once. If anyone said anything, it was to note that as tragic as a coronavirus charnel house would be, if we didn’t pour into the streets to shake our clenched fists at bad cops, that would be an even greater tragedy.

Here is why all the power centers in America could brook no criticism of the elective potential superspreader events happening across the country: A month ago we were supposed to be outraged by how coronavirus was hitting blacks harder than it was hitting others. Hard to imagine why.

Does it sound boorish to point out that blacks cannot be criticized for anything in America? If so, kindly correct. What can blacks be criticized for that doesn’t result in immediate cancelling? Maybe the high out-of-wedlock birthrate, a reality that sits right at the edge of permitted discourse. Anything else? Correspondingly, is there any criticism of whites, irrespective of the criticism’s veracity or depravity, that results in cancelling, ever?