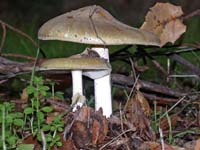 It is a familar story every fall and winter in northern California. The seasonal rains begin and wild mushrooms, including poisonous varieties, start popping up in woodland areas. Newbie immigrants eat the bad ones and get sick, with death being the result at times. The amanita phalloides (aka death cap) is one of the most lethal mushrooms.

"A woman who ate death cap mushrooms died in a San Francisco hospital over the weekend, nearly two weeks after she picked the mushrooms in a Lodi city park and included them as an ingredient in dinner, officials said Monday.

The woman's husband, who also ate the mushrooms, was released from California Pacific Medical Center on Monday. A cousin who ate the mushrooms is responding well after receiving an emergency liver transplant, a hospital spokesman said. [...]

The mushrooms take foothold beneath California live oaks and arrive after the season's first rains, then thrive as the temperature cools. Those poisoned by the mushrooms often are immigrants who mistake the death caps for harmless varieties that grow in their native lands, but mushroom experts also have been fooled by the fungus."

That's it, basically, with no names and few specifics given. Oh, and somebody got an immediate liver transplant, with no annoying long wait. Paid by the taxpayers? No mention. A liver transplant costs around half a million dollars.

The Stockton Record was more forthcoming with details: Woman dies after eating mushroom.

Tomasa Jimenez, a 31-year-old mother of three, was hiking on the Lodi Lake trail with her husband, Israel Vega, and cousin Fidelina Jimenez on Nov. 8 when they came across death cap mushrooms they mistook for an edible variety.

"They (the mushrooms) looked the same as the ones from Mexico," Vega said in a phone interview Monday. [...]

The family is planning her burial. Relatives are trying to contact the Mexican Consulate to ask if it can help pay for transporting her body to their hometown, Zimatlan, in Mexico's Oaxaca state."

Speaking of the Mexican Consulate, why aren't they warning their people of the perils of mushrooms in hazard-filled America?