Progress never sleeps these days, and the expansion of machine intelligence is growing faster than most of us civilians can follow. However, one simple metric is the development of the self-driving car, since Google co-founder Sergey Brin forecast in 2012 that self-driving cars would be available for consumers in five years.

Brin is putting the considerable power of Google into the project, with other heavyweights doing likewise, including Mercedes Benz, Tesla and Nissan. The Google car, a prototype for urban use that tops out at 25 mph, has been cruising around the city streets of Silicon Valley.

But it was lesser-known Delphi that scored the impressive cross-country drive, which took nine days from San Francisco to New York.

Below, the Delphi car looked pretty normal from the outside as it approached NYC. 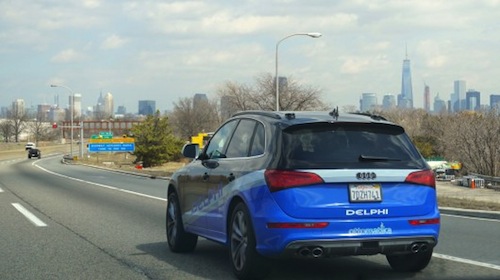 Some aspects of self-driving are available now, like self-parking. An NBC online story about the Delphi trip includes a video of a Mercedes that can park itself when the driver pushes the park-assist button. So the smarter car is coming in pieces.

Proponents of the self-driving car like Brin emphasize that it will create safer roadway travel once all the tech issues are ironed out.

However the robot-controlled vehicle will destroy millions of jobs for truckers and taxi drivers, just as other smart machines are making human workers obsolete from fruit pickers to diagnostic physicians.

The chart below from Bloomberg estimated that 89 percent of taxi driver and chauffeur jobs are at risk from computerization.

In the very near future, America wont need to import immigrant labor, because the machines will be doing much of the work. Therefore the correct number of immigrants now is Zero because the current systemic unemployment is partially due to businesses use of automation, computers and robots.

The latest chapter in the evolution of the self-driving, driverless automobile has been completed and proved successful with neither an accident or roadway incident during a cross-country trek that involved 15 states and traversed 3,400 miles.

And no, it wasnt Tesla or Google or Mercedes or GM or Ford or even Apple (which is the latest tech company rumored to be building such a vehicle, as Tech Times has reported).

It was auto supplier Delphi Automotive, which apparently has been very quietly advancing driverless technology.

In just nine days Delphis blue 2014 Audi SQ5 traveled from San Francisco to New York City, only giving the wheel over to a human driver on city streets. The car, built within the past year, passed its big test with flying colors, according to Delphi.

It was time to put it on the road and see how it performed, says Delphi CTO Jeff Owens. It was just tremendous. The company noted that the vehicle did 99 percent of the trek in automated mode.

Along the way, the vehicle encountered complex driving situations such as traffic circles, construction zones, bridges, tunnels, aggressive drivers and a variety of weather conditions, Delphi said in a statement.

Industry watchers say the cross-country trek is a huge advancement in getting such technology on the roads.

The technology is not what is most notable from this trip, said Jeff Miller, an associate professor at the University of Southern California. The fact that they drove as far as they did and had a lot of publicity will help the technology more than any programming or hardware on that vehicle.

While Googles been running a driverless vehicle over test tracks and roadways, putting 700,000 miles on its self-driving cars, and Audi just did a semi-long trip, from Silicon Valley to Las Vegas, Delphis feat is the most extensive yet.

The car, according to Delphi, never broke a speed limit, which apparently did not go over well with other drivers during the trek. Owens acknowledges the vehicle was the recipient of a few hateful gestures.

Delphi put a human driver in the drivers seat during the ride given the test aspect and to work out a few kinks, such as the car not wanting to move into a crowded left lane to avoid a police stop on a road shoulder and edging to one side for some looming semis, as apparently the vehicle shares the same fear of huge tractor-trailer trucks that many humans have.

The equipment was flawless, said Owens.