This is what happens when you reach a conclusion before you even look at the data.

Released Wednesday, the report is a comprehensive national review of hate crime laws that shows where laws variate. It also cited widespread flaws in data collection and reporting. Though the majority of hate crimes in the U.S. are committed by white people, motivated by racial or ethnic bias, the crimes disproportionately reported Black Americans as the attackers.

In at least 13 states, Black Americans were listed by law enforcement as the perpetrators in hate crimes at a rate roughly 1.6 to 3.6 times greater than the size of the state’s Black population, the report said.

“These repeated disparities … show that — despite the fact that people of color are far more likely to be the victims of hate violence — the instances of hate violence that are actually documented by police … are disproportionately those alleged to have been committed by Black people,” it read.

More than half a century since they were modernized, hate crime laws in the U.S. are inconsistent and provide incomplete methods for addressing bias-motivated violence, according to the report.

Due to the complexity of hate violence, certain statutes meant to protect racial minorities and marginalized groups are less effective, as a consequence of bias in the criminal justice system, the report says.

The existing laws can even discourage hate crime victims from coming forward, advocates say in the report.

“We really think this is the first report to bring together a state-by-state analysis along so many dimensions … with a focus on racial justice and criminal justice reform,” said Naomi Goldberg  [Email her] LGBTQ program director for the Movement Advancement Project, which authored the report in partnership with over 15 national civil rights groups. 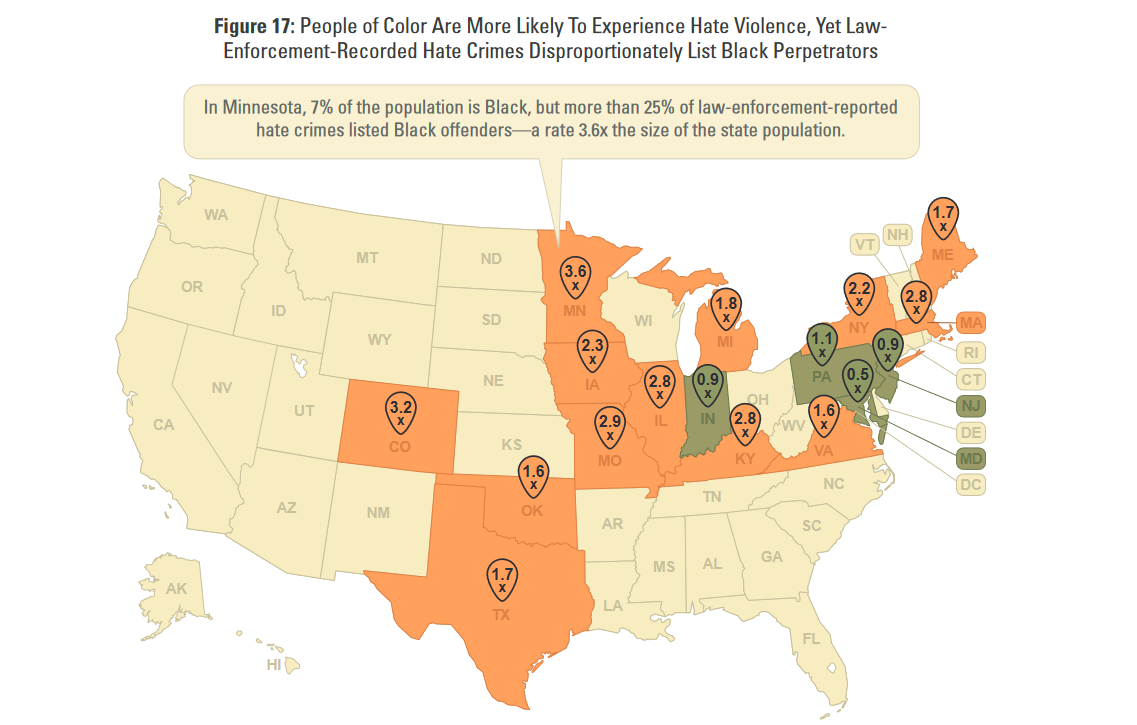 What started out as an attempt to libel white people as those who have a monopoly on committing hate crimes turned out to show blacks commit a disproportionate amount of them, meaning this report will be quietly tucked away in a drawer somewhere, never to be promoted again.