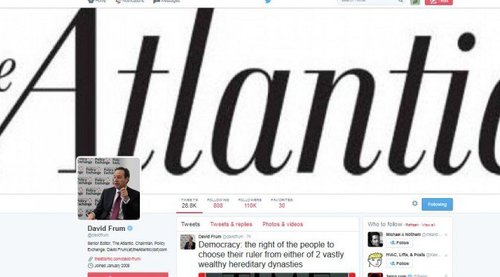 In The Atlantic, David Frum writes:

Romney ultimately lost the presidential election, of course, to the surprise and dismay of a party elite confident of victory until the very end. One might have expected this shock to force a rethink. The Republicans had now lost four out of the past six presidential elections. Another election had been won only in the Electoral College, despite the loss of the popular vote. Even their best showing, 50.7 percent of the vote in 2004, represented the closest escape of any incumbent president who won reelection since the first recorded popular vote.

And yet, within hours of Romney’s defeat, Republican donors, talkers, and officials converged on the maximally self-exculpating explanation. The problem had not been the plan to phase out Medicare for people younger than 55. Or the lack of ideas about how to raise wages. Or the commitment to ending health-insurance coverage for millions of working-age Americans. Or the anthems to wealth creation and entrepreneurship in a country increasingly skeptical of both. No, the problem was the one element of Romney’s message they had never liked anyway: immigration enforcement.

Owners of capital assets, employers of low-skill laborers, and highly compensated professionals tend to benefit economically from the arrival of immigrants. They are better positioned to enjoy the attractive cultural and social results of migration (more-interesting food!) and to protect themselves against the burdensome impacts (surges in non-English-proficient pupils in public schools). A pro-immigration policy shift was one more assertion of class interest in a party program already brimful of them.

Remember that Republican voters care more about aligning government with their values of work and family than they care about cutting the size of government as an end in itself.