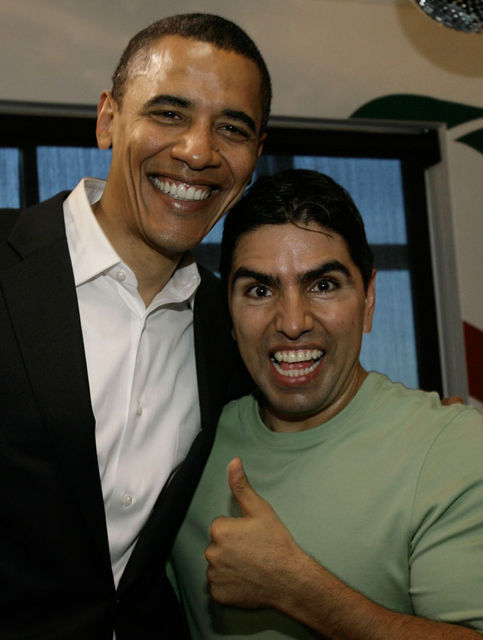 In Los Angeles, Spanish-language radio star Piolin Sotelo has been a long-time amnesty loudmouth. When Barack Obama barnstorms the city, he has frequently dropped by the studio to visit his pal Piolin and promise a big legalization law for the listeners real soon.

The ugly truth about Piolin has been accumulating for a while, particularly since last July when Univision fired him. You knew the charges were substantial for Univision to release one of its most popular Spanish chatterboxes, a man who personally shares the illegal alien experience.

He allegedly used his staff to forge letters of support for an amnesty campaign, which was doubtless a big strain on them. More serious were the sexual abuse charges, details of which are coming out.

Also, it just looks bad when a media face of the amnesty movement is shown to be an office dictator with shocking habits like humping and biting subordinates. At the height of his power, Piolin was ranked as among the 100 Most Powerful People in Southern California by the LA Times. The late Ted Kennedy was celebrated in an appearance on the radio show — perhaps he and Piolin swapped hints off-mike about fun things to do with underlings.

And make no mistake, Spanish-language media is vital in organizing the anti-sovereignty movement of foreign nationals. It’s too bad Piolin’s staffers didn’t pipe up earlier.

The former staffers worked with Sotelo when he hosted his wildly popular “Piolín por la Mañana” program on Univision Radio. However, the staffers were let go long before Sotelo’s program was abruptly canceled by the Spanish-language media conglomerate on July 22.

Sotelo sued the group of ex-staff members in Los Angeles County Superior Court in late August, alleging they had banded together to try to extort as much as $4.9 million from him. In response, lawyers for the group filed a lengthy motion on Oct. 15, asking a judge to strike Sotelo’s lawsuit.

Friday marked Sotelo’s return to radio with a new four-hour program on SiriusXM called “El Show de Piolín.” After Univision severed ties with Sotelo, SiriusXM leaped to sign him to be the centerpiece of the company’s effort to attract more Latino listeners.

Sotelo, 42, now is broadcasting from a new SiriusXM recording studio on Wilshire Boulevard.

In their motion, the six former workers alleged that as Sotelo’s Univision career began to soar — around 2006 — his behavior toward staff members turned increasingly abusive. He allegedly humiliated workers by calling them derogatory names, licking and biting them, rubbing his body against theirs, and grabbing his genitals.

“Sotelo bit two of the staffer defendants so hard that they had visible marks on their shoulders for days,” the motion said.

The group tolerated the alleged behavior, the filing said, because they feared they would lose their jobs if they complained.

“We are confident that their request will be denied,” Spitz, of the Los Angeles law firm Lerman Pointer & Spitz, said in a statement. “We look forward to the day of reckoning when the defendants will have to answer Eddie’s extortion claim in court.”

Sotelo previously has said that he is the victim of a smear campaign, and that ex-staff members were motivated by greed and jealousy.

Sotelo’s highly rated show on Univision ended last summer after a veteran producer, Alberto “Beto” Cortez, complained to Univision executives that he was being tormented by Sotelo.

In late July, the Los Angeles Times detailed the sexual harassment allegations that Cortez raised against Sotelo. Cortez was not part of the group sued by Sotelo in August.

When members of the group complained to Univision management a few years ago about Sotelo, he allegedly became angry and told them, “What happens on the show stays on the show,” the motion said. “Sotelo told the staffer defendants that no one would ever believe their complaints since he was “the star with the microphone,” and he had the fans, and they were insignificant in comparison.”

Palencia, who operated the delay function on the former radio show, alleged that Sotelo threw water bottles, trash cans and erasers at him, and would slap food out of his hands.

The six former staffers are represented by John C. Taylor and Robert R. Clayton of the firm Taylor & Ring.