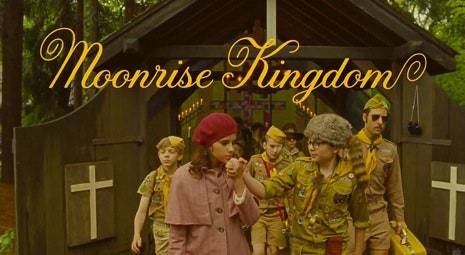 I finally saw a Wes Anderson movie with an audience, and I was rather surprised to find that about half the crowd found Moonrise Kingdom consistently funny, which has just left me more puzzled than before. I had made my peace with the idea that while Wes Anderson movies (e.g., Rushmore, The Royal Tennenbaums, The Life Aquatic with Steve Zissou — not to be confused with Paul Thomas Anderson movies like Punch-Drunk Love and There Will Be Blood) look like they are going to be funny, that the reason they aren't funny is because that's the director's plan, that while I don't know what he's trying to do, it must be something far more ethereal than humor. But now I find that half the people who go to Wes Anderson movies think they are hilarious, so I don't know what to think. Are his movies actually as funny as they seem like they would be and I just don't get the joke because of some deficiency in my personality? Or is humor really that hard? Or is Anderson some kind of genius at being not funny?

Granted, if I worked hard in writing about Moonrise Kingdom, I could make this intensely whimsical story about an adolescent boy and girl who run away together on a summer vacation island in Rhode Island in 1965, using his expert Boy Scout skills to elude search parties, sound funny.

On paper, for example, the casting is hilarious. The two saddest men in show business, Bill Murray and Bruce Willis, compete for the heart of the girl's mother, Frances McDormand. (The screenplay is co-written by Anderson and Roman Coppola, whose sister Sofia directed Murray in "Lost in Translation" as a depressed action movie star, presumably based on Willis [here's my review of "Lost in Translation"], so it's particularly amusing to see them cast together. Or at least in theory it's amusing. On screen, it's just kind of sad.)

The stylish social worker who swoops in by sea plane to take the boy off for electroshock therapy is played by the aristocratic white witch of Narnia, Tilda Swinton, daughter of "Major-General Sir John Swinton, KCVO, OBE, DL, Lord Lieutenant of Berwickshire." How much did they pay social workers in Rhode Island in 1965, anyway?

The usual response is that humor is just a personal thing, that either it strikes you as funny or not and there's nothing you can do about it. Actually, though, I don't find that true. Over the years, I've put a lot of effort into teaching myself to get jokes, that if lots of other people find something to be funny, it probably is if you think about it right. I find this good for the soul. This exercise also has the side effect that things that aren't supposed to be funny, like most newspaper articles, start sounding hilarious. Just put the ellipses in the right places and they turn into self-parody.