The Monty Python funny guys may be getting old, but they don’t want to face an early death caused by angering touchy Muslims. They are famous for tweaking religion in their 1979 comedy The Life of Brian, but there won’t be The Life of Mohammed coming any time soon.

It’s too bad, since the history of Islam is comedy gold, aside from the murders and brutal wars of conquest. Imagine the prophet’s nine-year-old wife Aisha and the possibilities for hilarious domestic misunderstandings between her and the geriatric hubby!

The excellent comic book Mohammed’s Believe It or Else! shows one approach, of illustrated stories from the prophet’s life and early Islam, plus accompanying scripture from the Koran and Hadith.

Another publication that has felt the brunt of Muslim literary criticism is the French humor magazine Charlie Hebdo which was firebombed in 2011 when it announced Mohammed would be a “guest editor” for an issue, as shown below: 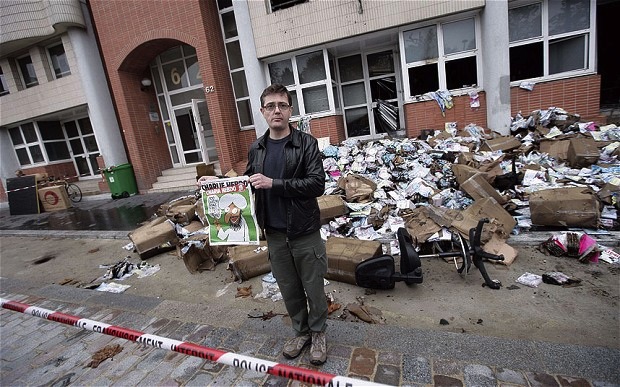 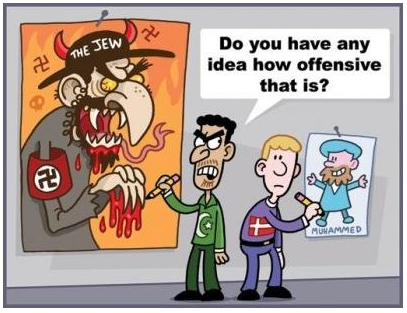 So the Python people are just being realistic about the degree to which Muslims despise western free speech. When The Life of Brian was shown, protests and complaints occurred, but the controversy played out in polite western fashion, such as in television debates, with no firebombings or murders. By comparison, the Japanese translator of The Satanic Verses, Hitoshi Igarashi, was stabbed to death in 1991, and the book’s author Salman Rushdie was fatwaed into hiding from death threats for years.

In addition, the Mohammed cartoons printed by the Danish newspaper Jyllands-Posten in 2005 were stirred by jihad activists into a controversy, causing anti-free-speech riots around the world and more than 200 deaths.

Perhaps the only hope for a Mohammed comedy film is for someone to follow the example of What’s Up, Tiger Lily, in which a Japanese James Bond-type film was redubbed with a completely different dialog with hilarious results (Trailer). But there would be no entertaining visuals, like a dancing Aisha music number.

For religious film humor, we will have to stick with The Life of Brian.

One of the funniest bits, for Latin students at least, was the graffito scene: “Romani ite domum!”

Back to the present, where the Religion of Bullies want to end everything fun. Why do we continue to allow Muslims to immigrate here??

You can’t parody Islam, says Palin: Monty Python star believes religious sensitivities have increased so much it would be impossible to make Life of Brian today, Daily Mail, December 30, 2013

During his Monty Python days he poked fun at everyone from the Establishment to Christianity.

But thanks to the threat of ‘heavily armed’ fanatics, Michael Palin has admitted there is one comedy taboo he is too scared to break- Islam.

The 70-year-old said religious sensitivities have increased so much since his comedy days it would now be impossible to make 1979 film Life of Brian – which satirised the life of Jesus – let alone laugh at Muslims.

He said: ‘Religion is more difficult to talk about. I don’t think we could do Life of Brian any more. A parody of Islam would be even harder.

‘We all saw what happened to Salman Rushdie and none of us want to get into all that. It’s a pity but that’s the way it is. There are people out there without a sense of humour and they’re heavily armed.’

In 1989, Mr Rushdie was forced into hiding after the Supreme Leader of Iran, Ayatollah Ruhollah Khomeini, issued a fatwa calling for him to be killed in revenge for his novel The Satanic Verses.

Ahead of a series of live reunion shows in July, Mr Palin admitted much of his Monty Python material would now seem dated to modern audiences.

He said: ‘There’s probably a lot of political incorrectness in Python but we can’t rewrite it. I suppose attitudes have changed – a lot of British comedy at that time was ladies’ clothes falling off but in a rather sweet farcical way. Now what you can watch on television is incredibly explicit about sex.

‘When we were writing you couldn’t even talk about homosexuality at all.

‘Python has always been about dealing with things you’re not meant to deal with. It’s like being at school – as soon as the teacher said ‘it’s not funny’ you started laughing.’

He added: We didn’t target people and say “We’re going to have a go at this or that”. We were just writing what would make the six of us laugh.”

‘There are lots of laughs to be got from the way life is. The English love embarrassment. We are the ‘sorry’ society.

‘Someone punches you in the face and you will say “I’m terribly sorry my face was there. Is your hand all right?”

‘But each generation of comedians is looking for something new. It was only very recently before Python that somebody openly made a joke about the Prime Minister.

There was an establishment which still had to be respected. Now we can talk about anything … and in an odd way it’s made us more depressed.’

He interviewed Mr Cleese for the show, but admitted the pair rarely meet and poked fun at the fact the Fawlty Towers star is constantly struggling to pay the costs of his divorce to third wife Alyce Eichelberger.

He told The Times: ‘I can never keep up with him. He’s always terribly rude about my travels – whenever he talks about them he yawns – but he’s always jetting around trying to make money for his alimony.’