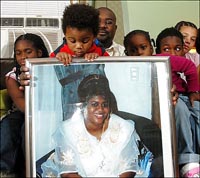 The direction this case is taking has been a small but welcome victory for American laws protecting public health and endangered species. (For more background, see my 2007 blog item Monkey-Eating Diversity on Trial.)

A Liberian immigrant and mother of nine children, Mamie Manneh, smuggled a substantial quantity of bushmeat to America, and then played the diversity card as her legal defense. The judge wasn't buying it [Judge rejects faith claim in NY monkey meat case, Newsday, Jan 3 2009].

Manneh was charged with smuggling the meat of two endangered species. As her case moved toward a trial, her lawyers argued that she and other immigrants in Staten Island's thriving community of Liberian Christians ate monkey meat for spiritual reasons, particularly during holiday celebrations, and were thereby protected by the First Amendment and federal religious freedom law.

U.S. District Judge Raymond J. Dearie rejected that defense on Wednesday and refused to throw out the charges.

In a 31-page decision, Dearie acknowledged that it was plausible for the consumption of monkey and other types of "bushmeat" to have religious significance, but said Manneh's claim lacked sincerity.

He also noted that it didn't address the main point of the criminal charge: That she hadn't applied for the permits needed to import such exotic foodstuffs and had misled border officials about what she was shipping into the country. [...]

Manneh is already serving jail time in an unrelated a case in which she was convicted of trying to run down a woman she suspected of sleeping with her husband.

Apparently the case can now go to trial. There's no rush because the accused perp is currently decked out in jailbird stripes, or maybe orange.