FBI Director Comey’s weekend decision not to pursue crooked Hillary for her mishandling of secret government emails was a startling acquiescence to the White House position: In a letter to Congress, Comey said that Clinton should not face criminal charges on the basis of newly discovered State Department emails on a non-secure device.

One can imagine that the FBI Director was ferociously pressured to back down from his earlier accusations. And the switch created the desired headlines one day before the election that concerned voters could safely choose Hillary: she won’t be dragged from the Oval Office to be tried as a criminal!

The Sacramento Bee had a nicely artistic presentation: 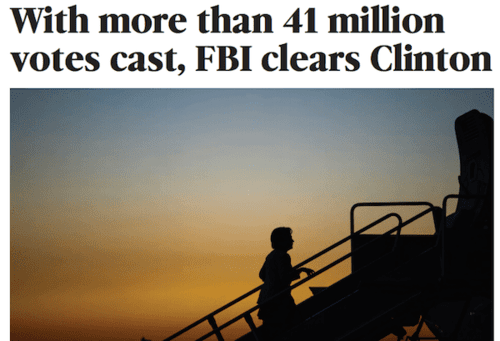 The liberal press all headlined with the same not-so-subliminal message — Vote Democrat:

So five out of eight newspapers (chosen by me as being typical major publications) used the verb “clear” which is broad and has the air of finality.

However, the truth is more complex than a brief headline can convey: Hillary may get a temporary reprieve on the email case now, but that doesn’t mean she is off the hook. As Congressman Trey Gowdy (a former prosecutor) remarked on Sunday, “Investigations are never over unless a statute of limitations has expired or unless jeopardy has attached.”

So if something more incriminating turns up, it’s game on.

Plus, the Clinton Foundation remains an object of FBI investigation and is rumored to be a stronger case. In fact, Clinton Cash author Peter Schweizer appeared on a Fox Business show Monday and remarked, “The way it’s been explained to me by people in the FBI sphere is that basically they’re going to get one bite at this apple, so if you bring an email case prosecution, or were to do that and were to fail, the Clinton Foundation investigation just politically would be too much.”

Certainly the Wikileaks story that Chelsea’s deluxe wedding was financed by the Foundation has refocused attention on family’s corrupt slush fund disguised as a do-gooder organization.

So Hillary in prison orange remains a possibility, albeit an unlikely one.