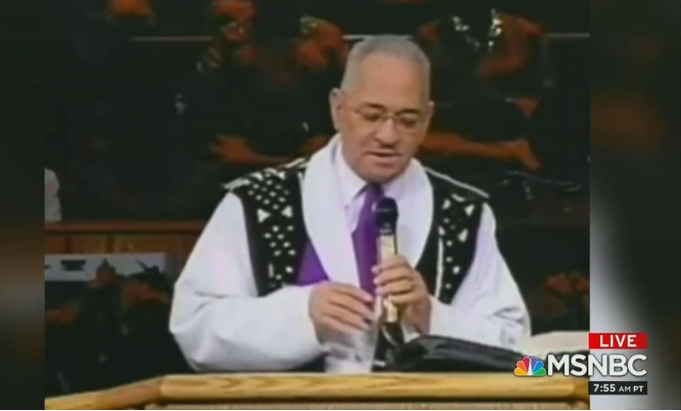 Missing The Point At Media Matters—Why Obama's Church Is Objectionable

Citing the potential for increased press scrutiny of Obama, Hitchens asserted: "[T]his dumb, nasty, ethnic rock 'n' roll racist church that he goes to in Chicago, he won't be able to walk away from that anymore." In fact, while Obama's church — the Trinity United Church of Christ in Chicago — is predominantly African-American, it has been described by non-blacks as "enthusiastically welcom[ing]." According to an April 2 article on the website for The Martin Marty Center — which is described on its website as "an institute for the advanced study of religion at the University of Chicago" — professor emeritus Martin E. Marty wrote of Obama's church: "My wife and I on occasion attend, and, like all other non-blacks, are enthusiastically welcomed." In addition, Rev. Jane Fisler Hoffman, a minister in the United Church of Christ who attends Trinity, recently made a statement about the church — video of which is available online — in which she stated that "[m]inisters all around the United Church of Christ — European-American, African-American, and other denominations — bring people from their churches to Trinity because the worship is so powerful, the preaching is so meaningful and prophetic." Hoffman went on to add that Trinity "is a church that reaches out to everybody, locally, around the world, all colors, and it just wants to share the gospel and good news of Jesus."

Hitchens isn't saying that TUCC is a racist church because they refuse to admit whites to their services. (Under religious freedom, you could have racially exclusive church, where you couldn't have a racially exclusive anything else—the most extreme example of a 100 % racially exclusive religion is caste Hinduism.) What he's saying that the TUCC under Reverend Jeremiah Wright is ideologically racist.That we can prove. Wright's church still has this "Black Value System" thing on its website:

Disavowal of the Pursuit of “Middleclassness”

Classic methodology on control of captives teaches that captors must keep the captive ignorant educationally, but trained sufficiently well to serve the system. Also, the captors must be able to identify the “talented tenth” of those subjugated, especially those who show promise of providing the kind of leadership that might threaten the captor’s control.

Those so identified as separated from the rest of the people by:

Killing them off directly, and/or fostering a social system that encourages them to kill off one another. Placing them in concentration camps, and/or structuring an economic environment that induces captive youth to fill the jails and prisons. Seducing them into a socioeconomic class system which while training them to earn more dollars, hypnotizes them into believing they are better than others and teaches them to think in terms of “we” and “they” instead of “us”. So, while it is permissible to chase “middle-incomeness” with all our might, we must avoid the third separation method-the psychological entrapment of Black “middleclassness”: If we avoid the snare, we will also diminish our “voluntary” contributions to methods A and B. And more importantly, Black people no longer will be deprived of their birthright, the leadership, resourcefulness, and example of their own talented persons.

What this means is that no matter how successful a black American gets, he must never stop hating and blaming whites for the failure of other blacks. And it's deeply conspiratorial. Its like that thing in Boyz in the Hood:

Laurence Fishburne: Why is it that there is a gun shop on almost every corner in this community?

The Old Man: Why?

Laurence Fishburne: I'll tell you why. For the same reason that there is a liquor store on almost every corner in the black community. Why? They want us to kill ourselves.

It's nonsense. So when Media Matters follows Hitchens' assertion that TUCC is a "dumb, nasty, ethnic rock 'n' roll racist church" with a sentence beginning "In fact..." they are not adding any actual facts to the debate, or answering Hitchen's basic charge.