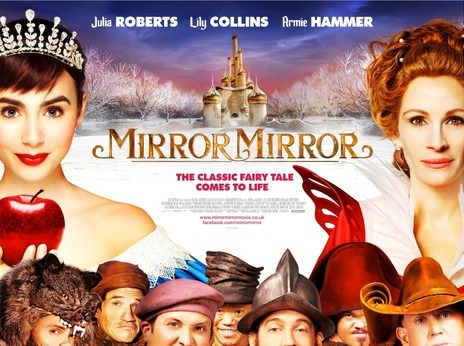 I went to Tarsem Singh's kid's movie "Mirror Mirror" with Julia Roberts as Snow White's wicked step mother, the queen who is the fairest of them all, to see if Tyler Cowen's interpretation of the movie as anti-Indira Gandhi Sikh propaganda makes sense.

Lots of kids movies actually are political allegories because they generally don't give you a $100 million to make a movie until you are so old that you find politics interesting. So, middle aged people have to come up with something to flesh out 100 minutes of story-telling, so they put in their current obsessions.

"Mirror Mirror" is certainly more fun to watch from a Cowenian perspective. The set decorating is gorgeously "Indo-European" in its eclecticism. Maybe three fourths of the look of the movie is European, but the rest is West Asian or South Asian. That part of the world, centering around Persia, has traditionally been obsessed with luxury, and Singh certainly loves fancy stuff. The late Edward Said might have clucked over Singh's Orientalist taste, or does Singh get a pass for being from the Punjab himself? It's so hard to keep this stuff straight.

The castle over a frozen lake is likely modeled upon the Sikh separatist temple redoubt that Gandhi invaded in 1984, but could conceivably be Russian. (Many of the famous buildings in Russia were designed by Italians, but their onion domes look Western Asian.)

Some of the movie is funnier when viewed through a Sikh lens. The movie is set in a snowy winter, but none of the characters ever seem to feel the slightest bit cold. People walk barefoot in the snow without any discomfort. My guess is that Singh remembers hearing the story of Snow White as a child before experiencing snow itself.

Other parts of the movie are only comprehensible via the Sikh subtext. For example, there is a bunch of hoopla about a dagger that Snow White's father, the late King, left his daughter. The American screenwriters seem pretty baffled at coming up with an explanation for the dagger, merely having Julia Roberts laugh off the reason it's in the movie at all during her voiceover narration. Now, I don't know much about Sikhs, but at least I do know they used to always get in trouble at airports trying to wear their sacred daggers onto the airplanes. So, I can write off the daggermania to the director being Sikh.

Is Julia Roberts' character really about Indira Gandhi like Cowen says? Are the seven dwarfs in the movie a reference to Bawana, the Sikh dwarf-avatar?

I dunno. I simply don't know as much stuff as Cowen does. And the movie, while not bad, isn't good enough to demand a lot of research from me. There is something off about the comic timing of everybody except Roberts, who is quite funny, as an Evil Queen who uses today's innocuous corporate vocabulary ("agree to disagree") for her malign purposes. The slapstick is particularly inept.

But, it's definitely more interesting as possibly Sikh propaganda than as just another fairy tale movie.