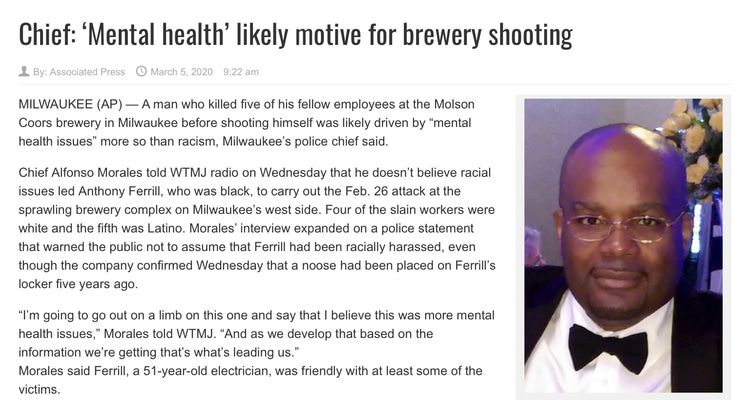 In a reminder that local cops tend to be much more sensible than the national media about what motivates criminals, from the AP:

MILWAUKEE (AP) — A man who killed five of his fellow employees at the Molson Coors brewery in Milwaukee before shooting himself was likely driven by “mental health issues” more so than racism, Milwaukee’s police chief said.

Chief Alfonso Morales told WTMJ radio on Wednesday that he doesn’t believe racial issues led Anthony Ferrill, who was black, to carry out the Feb. 26 attack at the sprawling brewery complex on Milwaukee’s west side. Four of the slain workers were white and the fifth was Latino. Morales’ interview expanded on a police statement that warned the public not to assume that Ferrill had been racially harassed, even though the company confirmed Wednesday that a noose had been placed on Ferrill’s locker five years ago.

“I’m going to go out on a limb on this one and say that I believe this was more mental health issues,” Morales told WTMJ. “And as we develop that based on the information we’re getting that’s what’s leading us.”

Ferrill had been claiming disability so he was worried that the brewery was sending a private investigator to keep an eye on him to get evidence that he was active, which sounds plausible. But the part of his claim that they were breaking into his house and rearranging the furniture does not.