Things are changing down on the farm. Smart machines in the form of milkbots are lightening the load a bit for dairy farmers, removing the pressure of needing to have someone in the barn every twelve hours 365 days a year. After a little training, the cows walk into the milking contraption whenever they feel like it and voila — automatic milk.

The technology is a particular plus because it relieves farmers of depending on illegal alien workers. For that reason, this application of robotics is welcome, unlike many others.

The farmers in today’s story are happy because the milkbots allow them more interaction with their animals beyond milking and help create a less regimented lifestyle vis-a-vis time. 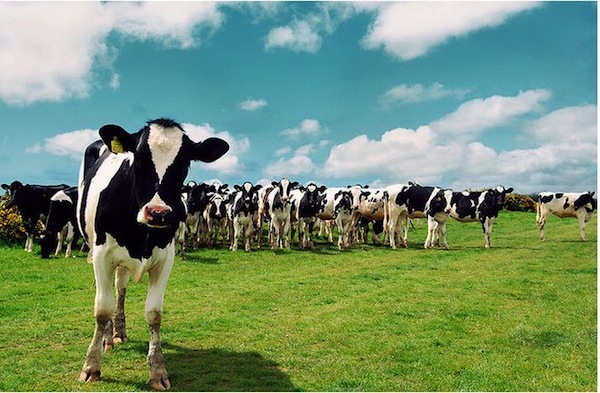 EASTON, N.Y. — Something strange is happening at farms in upstate New York. The cows are milking themselves.

Desperate for reliable labor and buoyed by soaring prices, dairy operations across the state are charging into a brave new world of udder care: robotic milkers, which feed and milk cow after cow without the help of a single farmhand.

Scores of the machines have popped up across New York’s dairy belt and in other states in recent years, changing age-old patterns of daily farm life and reinvigorating the allure of agriculture for a younger, tech-savvy — and manure-averse — generation.

“We’re used to computers and stuff, and it’s more in line with that,” said Mike Borden, 29, a seventh-generation dairyman, whose farm upgraded to robots, as others did, when disco-era milking parlors — the big, mechanized turntables that farmers use to milk many cows at once — started showing their age.

The view is improved as well. “Most milking parlors, you see, you really only see the back end of the cow,” Mr. Borden’s father, Tom, said. “I don’t see that as building up much of a relationship.”

Robots allow the cows to set their own hours, lining up for automated milking five or six times a day — turning the predawn and late-afternoon sessions around which dairy farmers long built their lives into a thing of the past.

With transponders around their necks, the cows get individualized service. Lasers scan and map their underbellies, and a computer charts each animal’s “milking speed,” a critical factor in a 24-hour-a-day operation.

The robots also monitor the amount and quality of milk produced, the frequency of visits to the machine, how much each cow has eaten, and even the number of steps each cow has taken per day, which can indicate when she is in heat.

“The animals just walk through,” said Jay Skellie, a dairyman from Salem, N.Y., after watching a demonstration. “I think we’ve got to look real hard at robots.”

Many of those running small farms said the choice of a computerized milker came down to a bigger question: whether to upgrade or just give up.

The Bordens and other farmers say a major force is cutting labor costs — health insurance, room and board, overtime, and workers’ compensation insurance — particularly when immigration reform is stalled in Washington and dependable help is hard to procure.

The machines also never complain about getting up early, working late or being kicked.

“It’s tough to find people to do it well and show up on time,” said Tim Kurtz, who installed four robotic milkers last year at his farm in Berks County, Pa. “And you don’t have to worry about that with a robot.”

The Bordens say the machines allow them to do more of what they love: caring for animals.

“I’d rather be a cow manager,” Tom Borden said, “than a people manager.”

The machines are not inexpensive, costing up to $250,000 (not including barn improvements) for a unit that includes a mechanical arm, teat-cleaning equipment, computerized displays, a milking apparatus and sensors to detect the position of the teats. Pioneered in Europe in the 1990s, they have only recently taken hold in Pennsylvania, Wisconsin and New York, which is a leader in the production of Greek yogurt and the third-largest milk producer in the country.

Kathy Barrett, a senior extension associate at the College of Agriculture and Life Sciences at Cornell University, credited a recent surge in milk prices with motivating dairy owners to seek new ways to improve their farms — and farm life.

“It’s really the flexibility of not stopping doing hay because at 3 o’clock you have to go milk,” Ms. Barrett said.

Ms. Barrett said about 30 farms in New York had installed more than 100 robotic milkers. Two European manufacturers, Lely and DeLaval, said they had installed hundreds more across the country. California, the nation’s leading dairy producer, has been a curious holdout, in part because there were problems at some farms that adopted the technology in its early years.

The president of Western United Dairymen, Tom Barcellos, who milks some 1,300 cattle at his operation in Tulare County, Calif., said he was intrigued by the robots but worried that they would be too slow to keep up with the needs of a large herd.

“They just don’t milk enough cows to be economical,” Mr. Barcellos said. “You might milk 40 cows an hour. We can do 80.”

But farmers said output generally increased with robots because most cows like being milked more often. (To allow lactation, cows are kept in a near-constant state of impregnation.)

Animal welfare advocates give the new machines a guarded thumbs-up. “Not being milked hurts,” said Paul Shapiro, a vice president of the Humane Society of the United States. He said letting cows move more freely was also an improvement on older methods that involved tying cows to stanchions.

The Bordens installed two milkers for about 100 of their cows last November in a new barn, a $1.2 million project all told. “It was a little cash-scary,” Tom Borden said. But, he added, he hoped the machines would pay for themselves within seven or eight years through labor savings and other efficiencies, like tailoring the amount of feed to a cow’s appetite.

The Bordens expected a dip in production as their cows got used to the machines. But the cattle were quick learners.

“It just clicked,” said Susan Borden, Tom Borden’s 24-year-old daughter. “One day we came in and they had started milking themselves.”

Sure enough, on a recent Friday, the Bordens stood watch as cows lined up in front of the closet-size devices; each quietly allowed the machine to wash and scan its underbelly with lasers before attaching mechanical milk cups.

The cows ate the whole time, then moved along when the machine was finished. Nearby, another new device, a Roomba-style robot, pushed feed toward cows who lounged in a pen or lay on straw mats.

“We’re the most disruptive thing in here,” Mr. Borden said.

The machines have mellowed both the cows and much of the routine on the Bordens’ farm — though the humans have received the occasional distress call from their mechanized milkers.

“It’s a machine, so it breaks down,” Mike Borden said. “But people get sick, too.”

All of which has the Bordens considering more robots, and dreaming of the perquisites that enhanced automation could bring.

“I don’t think I’m ever going to sleep in real late,” Tom Borden said. “But if we could roll it back another hour, that would be great.”