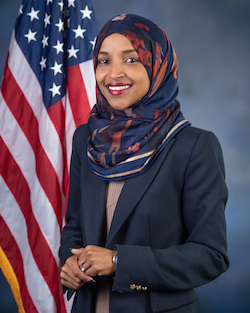 Recently, we concerned citizens learned that the Somalia-born representative of Minnesota’s 5th District in Minneapolis, Ilhan Omar, had attracted the interest of several federal agencies to investigate her for an assortment of offenses, including perjury, immigration fraud, tax fraud, student loan fraud and possibly bigamy.

Most of those crimes all sound like jail time to non-lawyer me, but an actual immigration lawyer recently wrote that it’s more likely she might have her US citizenship removed or be deported.

Of course, the ideal outcome would be for the scheming America hater to do some hard time in the joint, followed by a one-way trip home — win, win. But permanent removal in the near future would be an acceptable consolation prize for patriotic Americans.

The immigration lawyer examines a substantial list of questions about Omar’s background that has “more questions than answers” — and it’s curious that a well known public figure has so many mysteries about her background and identity.

The lawyer warns she could be repatriated if she doesn’t get a good attorney — hope springs eternal!

Why Criminal Prosecution Might Be The Least Of Ilhan Omar’s Legal Concerns, The Federalist, by Matthew Kolken, January 21, 2020

Rep. Ilhan Omar needs competent immigration counsel to ensure that there is no threat of her losing her citizenship, or, worse, deportation.

As an immigration lawyer, the very first question that came to mind when I read these reports was what immigration consequences, if any, could attach in the event that any of the above allegations are proven beyond a reasonable doubt in a court of law. My analysis, unfortunately, has resulted in more unanswerable questions than definitive answers.

My analysis started with the fact that it is widely known Omar was born in Somalia, and immigrated to the United States as a Somali refugee. At some point after her admission to the country, she obtained U.S. citizenship. The Associated Press reported on November 5, 2009, that Omar fled Somalia to a refugee camp in Kenya with her family in 1991. She ultimately immigrated to the United States as a refugee in 1995.

If this report is correct, the analysis is fairly straightforward. Generally speaking, U.S. immigration law permits refugees to apply for permanent residence, commonly known as a “green card,” one-year after arrival. Five years after holding a green card, refugees may then apply to become a citizen through a process called naturalization.

Naturalization applicants must show they meet residency requirements, and have good moral character. It was reported that Omar became a citizen in 2000, five years after her arrival, at the age of 17.

This last detail is important, and is where things start to get murky. If Omar became a U.S. citizen at the age of 17, she must have obtained it through automatic acquisition after the naturalization of at least one of her parents. Omar would not have been able to apply for citizenship on her own because individuals are ineligible to apply for naturalization until age 18.

Here is where it gets really complicated. The requirements for automatic acquisition have changed several times throughout the last century. The marital status of Omar’s parents would determine whether she could have acquired citizenship. I have no details about their marital status to be able to determine if these legal requirements were fulfilled.

However, if Omar did not have to apply for naturalization, it could eliminate one possible crime that she could be charged with: knowingly giving false information in furtherance of an application for citizenship. A conviction for this crime would lead to her denaturalization, resulting in the loss of citizenship, and the institution of removal proceedings to deport her.

But the analysis doesn’t stop there. For Omar to have automatically acquired citizenship, she must also have been lawfully admitted to the United States for permanent residence, and there are reports questioning the legality of her admission as a refugee.

David Steinberg has covered the Omar saga for several years and has openly questioned whether she is who she says she is. Steinberg has alleged that Omar assumed her name from an unrelated family that was being granted refugee status. Although I have no way to independently assess the veracity of this report, there is circumstantial evidence that this type of immigration fraud was rampant in the circumstances under which Omar was admitted to the United States.

Specifically, in 2009 the Obama administration assessed the viability of re-employing a Bush-era pilot program that unearthed widespread immigration fraud. It found that as many as 87 percent of applications claiming familial relationship were fraudulent. If the reports are ultimately found true, the immigration consequences would be severe, including loss of citizenship and the institution of removal proceedings. Moreover, there may be no defenses to removal in an immigration court setting to stop her deportation. (Continues)