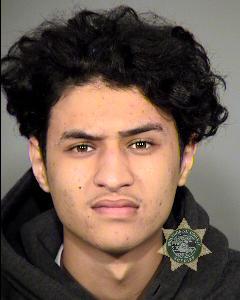 There is more information coming out about the Middle Eastern man who caused a Continental flight to return to Portland on Tuesday because of his disruption, violence and yells of Allah is great after being asked to put out his electronic cigarette. Persons getting off the plane spoke in terms of a terrorist attack and how it was thwarted by resistance from passengers. See my blog Diversity in Travel which includes a video of passenger descriptions.

The man in question is a 19-year-old Saudi student, Yazeed Mohammed Abunnayan (pictured). He was traveling with a friend to Houston, but was arrested after the pilot thought his violent behavior warranted a return to Portland.

Interestingly, Abunnayan was also arrested on Sunday in Ashland for driving erratically, smashing into two police cars and trying to run down pedestrians. Yet he was bailed out rather than deported as a dangerous alien.

A man who led Ashland police on a car-crashing chase through town Sunday night has been arrested again, this time on a federal charge of interfering with flight crew members on a plane out of Portland. [. . .]

He had refused to turn off an electronic cigarette yelling profanities and swinging his fist at the flight attendant, hitting or attempting to hit several passengers, and speaking or singing about Usama bin Laden and his hatred of women, a federal indictment said. His action caused the flight attendant to deviate from safety protocols by unbuckling her restraints and leaving her seat during takeoff, thereby forcing the flight to alter its route and return to Portland, the indictment said. [. . .]

On Sunday, Abunayyan reportedly was spinning circles in a car on Siskiyou Boulevard, driving erratically, and trying to run over pedestrians. He led police on a 20-minute chase back and forth through town, ramming two police cars before high-centering his car on a dirt embankment at the dead end of Clear Creek Drive. He was arrested on charges of driving under the influence of intoxicants, reckless driving, eluding police, two charges of first-degree criminal mischief, three charges of hit and run, six charges of reckless endangerment, and two charges of assault on an officer, but posted 10 percent on his $65,000 bail.

Another article noted that Yazeed was studying English prior to enrolling as a college student at Sonoma State. Saudi students are known for bad driving and co-ed harassment, not to mention the bent toward terrorism. Apparently the full tuition checks are a big enough enticement for universities to overlook the extreme negatives of such dangerous characters. However the universities irresponsibility endangers public safety when they see only the dollars that foreigners bring.

Yazeed Abunayyan, a 19-year-old student who fled from Ashland police Sunday and then disrupted a flight from Portland Tuesday, suffers from schizophrenia and has not taken his medication for the last three weeks, said his cousin and acquaintances living in Ashland.

I tried to stop him, but I could not, said Fahad Alsubaie, his 21-year-old cousin, a Saudi Arabian exchange student studying English at Southern Oregon University.

Alsubaie said he was the person hanging out of the drivers side window trying to pull the key out of the cars ignition while Abunayyan was driving away from police in the Safeway parking lot Sunday night. Abunayyan led police on a 20-minute chase during which he rammed two police cars before being apprehended. [. . .]

He was studying at the schools language institute in order to learn more English before beginning his classes at the university, she said.

He planned to major in English, said Alsubaie.

Does the Saudi guy really have schizophrenia or is that just an excuse for an uncontrollable young Muslim? It wouldnt be the first time a Middle Eastern family sent their difficult son to America to get rid of him. Or use insanity as an excuse for jihad or plain Muslim arrogance.