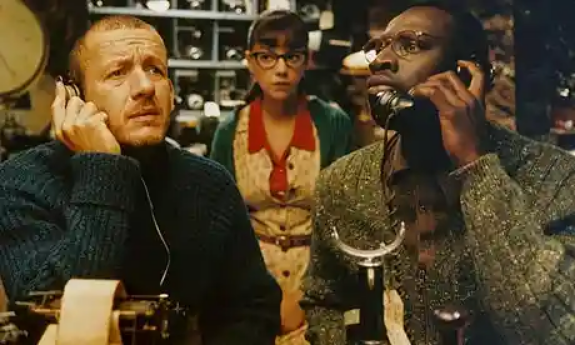 From my review in Taki's Magazine:

Jeunet’s last three films are pervaded by an exaltation of the pleasures of Frenchness. Am?©lie, the story of a shy, kind-hearted waitress who contrives elaborate plots to make life happier for her neighbors, became France’s biggest global smash, in part because Jeunet conjured up an idyllic, nostalgic Montmartre neighborhood as adorable as his star.

The Communist Party newspaper L’Humanite called Amelie fascist for aesthetically cleansing Paris of its countless immigrants, but diversity sells better in rhetoric than at the box office. Audiences around the world would rather dream of the Paris of Toulouse-Lautrec or of Edith Piaf than the 21st Century megalopolis of bored suburban youths nightly setting cars on fire. Thus, Japanese tourists make pilgrimages to Am?©lie’s locations. (Overly susceptible Japanese visitors can come down with ”Paris Syndrome” when their infatuated anticipations collide with Gallic brusqueness; the Japanese embassy repatriates them under medical supervision.)

Not all Americans, of course, like the French. Historically, Franco-American love-hate feelings have been the classic example of the Ben Franklin Effect: ”He that has once done you a kindness will be more ready to do you another than he whom you yourself have obliged.” After Ben talked the French government into bankrupting itself fighting Britain for our independence, the French loved us. (Witness their gift, the Statue of Liberty.) After we bailed them out in WWI, our Lost Generation loved them. By the time we rescued them again in 1944, they were resenting our generosity. Eventually, we started calling them cheese-eating surrender monkeys.

Deep down, though, we envy the French their cheese-eating quality of life.