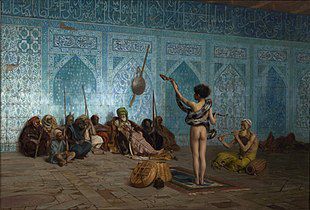 French philosopher Michel Foucault and Palestinian-American literary critic Edward Said are often thought of as key figures in the postmodern revolution in academic theory that began in the 1970s. Strikingly, however, they had intensely opposed feelings about gay European intellectuals sojourning in the Middle East to indulge themselves with low cost boys.

Foucault, who missed out on the events of May 1968 in Paris because he was teaching in Tunisia, wanted to bring the lackadaisical Middle Eastern tradition of law enforcement to France. From my new column in Taki’s Magazine:

Another cause to which Foucault devoted himself was liberating children to have sex with grown men. In France, the age of consent in 1977 was only 15 years old, but Foucault nevertheless signed a petition, along with Jean-Paul Sartre, Simone de Beauvoir, and Jacques Derrida, to decriminalize pedophilia.

Foucault did a 1978 radio interview to promote the abolition of age-of-consent laws in France. It’s noteworthy how smoothly Foucault’s usual arguments on other topics service this campaign. …

How much of Foucault’s vast intellectual enterprise of denouncing categorization of individuals as possessing distinct identities was intended to undermine the legal category of children too young to consent? Did Foucault happen to dream up his ideas first and only then realize that his logic proved that it should be legal for him to have sex with boys? Or did he want to have sex with boys first and then dreamt up his vast system of justification?

Foucault himself once said:

In a sense, all the rest of my life I’ve been trying to do intellectual things that would attract beautiful boys.

In contrast, from my 2017 Taki’s Magazinecolumn “The Vengeance of Edward Said:”

My suspicion is that, shocking as it may sound to his fans, Said had normal, masculine, conservative affections for his blood and soil.

In particular, Said complained about Western Orientalists depicting the Middle East as feminine and alluring.

This was not just a literary metaphor for Said. For many years, adventurous European artists and writers like Flaubert had engaged in sex tourism in Muslim lands and come back to whip up spicy works for the European market.

Just as the men of Europe are finally starting to object to the sex tourism hegira now running from the Middle East to the blonder lands, Said, as a racial loyalist, resented men of a different ancestry defiling his people’s womenfolk…and, perhaps especially, his people’s boyfolk.

Ironically, Said had the IQ and cultural sophistication to devise complex-sounding and thus hugely influential justifications for his basically redneck and wholesome emotion: Don’t come around here no more.