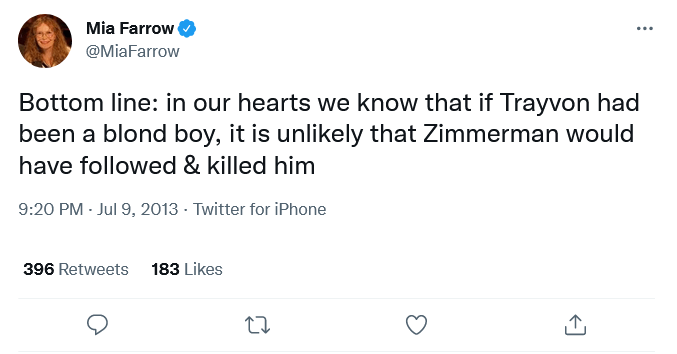 Mia Farrow:"In Our Hearts We Know That If Trayvon Had Been A Blond Boy..."

Via Michelle Malkin's Twitchy site, I see that actress Mia Farrow is saying that

Bottom line: in our hearts we know that if Trayvon had been a blond boy, it is unlikely that Zimmerman would have followed & killed him

Well, Trayvon was wearing a hoodie, and except on a direct full-face view, you can't tell what color the person inside is.

But he would still have been a suspicious-looking teenager wandering by night.

The difference is that if he had been a "blond boy" he would not have felt racial hate for George Zimmerman. A "blond boy", spoken to by Zimmerman, would have seen a grown-up, not a "creepy-ass cracker."

Therefore, a "blond boy" would not have leapt on Zimmerman in a brutal, racially-motivated, and potentially lethal attack.

So Ms. Farrow is right, but not for the reasons she thinks.