Another marker on the downward spiral of Mexico. Is the top cop receiving a cartel paycheck or is he merely disgusted with the ubiquity of corruption? Either way, the place is in the sewer and turning to crap.

The top officer of Mexico's federal police force has quit amid allegations that drug gangs have infiltrated senior levels of crime-fighting agencies, according to a resignation statement posted Saturday.

Acting federal police Commissioner Gerardo Garay said he was stepping aside "to place myself at the orders of legal judicial authorities to clear up any accusation against me."

Garay did not say what accusations he was referring to, nor were federal officials available Saturday to comment on the resignation. But the newspaper Reform reported Saturday that prosecutors are looking into whether the federal police assigned to the Mexico City airport had aided drug traffickers.

A top operator of the Sinaloa drug cartel was arrested in Mexico City on Oct. 20 following a gunbattle with police, and prosecutors say the man was in charge of trafficking cocaine and methamphetamine through the capital's international airport. [Mexico's top federal police chief quits amid probe San Francisco Chronicle, November 1, 2008]

The New York Times had an oddly chipper item today, In Mexico, Sorting Out Good Guys From Bad. It seems that some narco types looks like thugs and others wear suits. What a journalistic revelation.

There was a gray-haired, grandfatherly type who was pushing 70, as well as an avuncular figure with a neatly coiffed goatee and wire-rimmed spectacles perched upon his nose. Some of the five men who found themselves on the front pages of newspapers on their way to jail, wore suits, which made them look more like bureaucrats than bad guys.

Among the greatest challenges in Mexico's drug war is the fact that the traffickers fit no type. Their ranks include men and women, the young and the old. And they can work anywhere: in remote drug labs, as part of roving assassination squads, even within the upper reaches of the government. 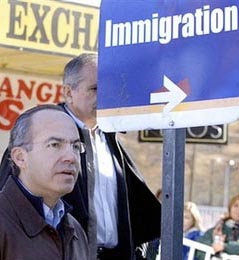 There is some interesting stuff tucked away at the end, which contains irony which I am sure was unintended, regarding the rule of law.

In Tuesday's speech, a clearly frustrated Mr. Calderon said that the fight to clean up Mexico depended on citizens putting their country first and respecting the law above all else. He suggested that the small bribes so often demanded by the officer on the beat, and accepted by the public as normal, for infractions real and imagined, were not disconnected from the government official receiving millions of dollars in drug profits.

"We need a stronger society, a society that lives the principle of legality with conviction, that encourages, promotes, spreads and educates its children with values," Mr. Calder??n said. In other words, there has to be a line people will not cross, even for a suitcase full of cash.

Mexico as a nation of laws—woo hoo!